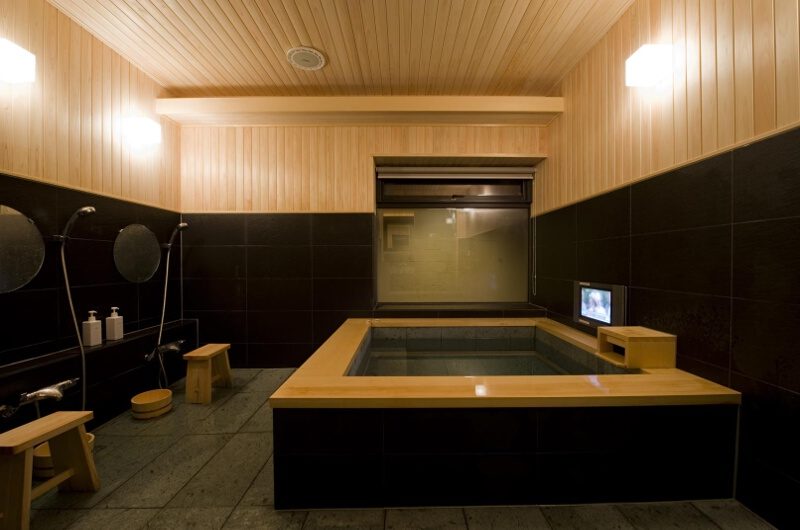 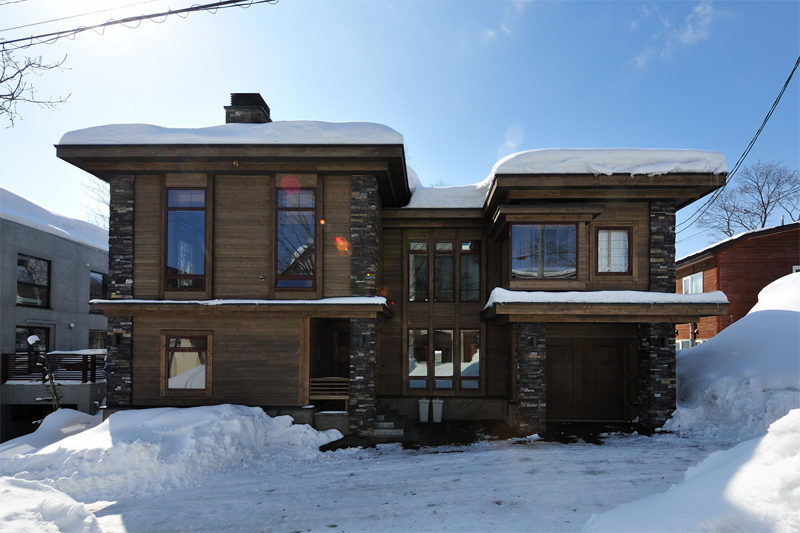 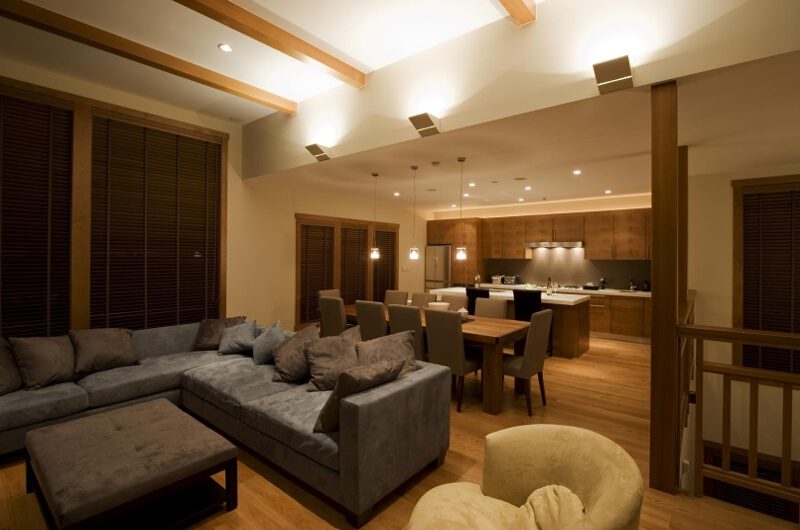 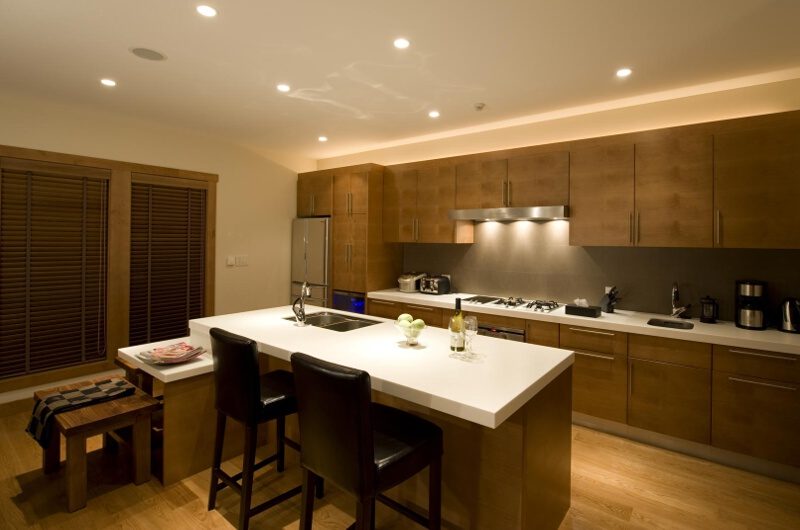 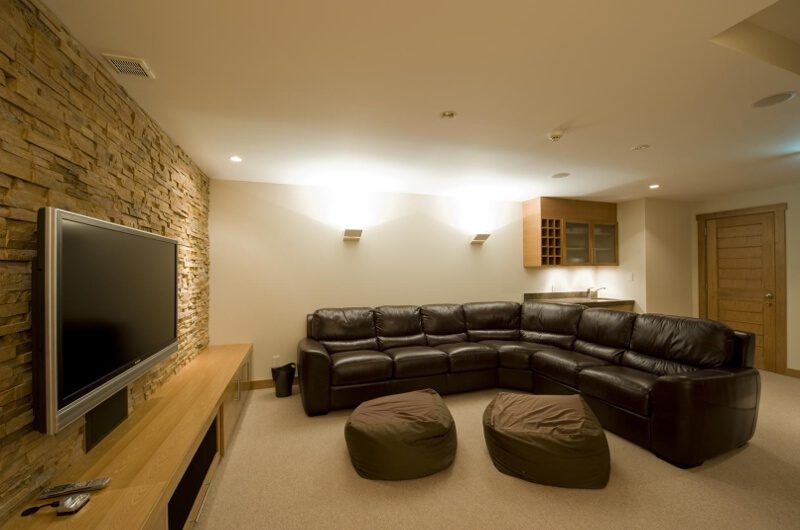 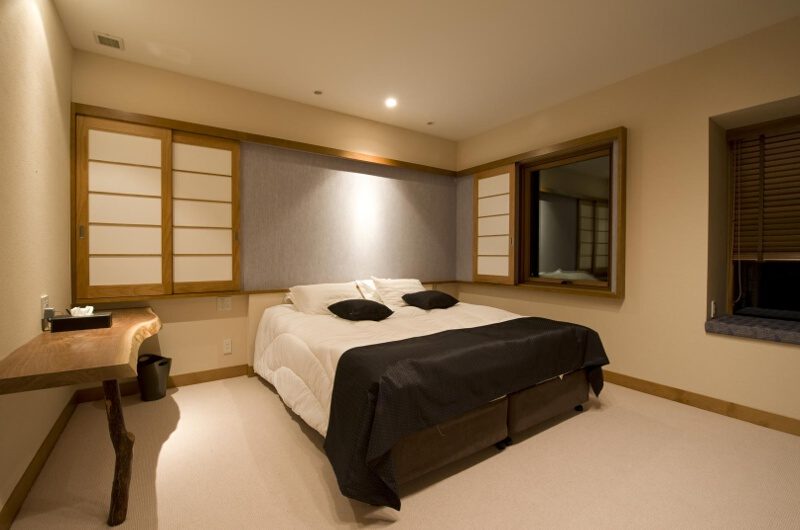 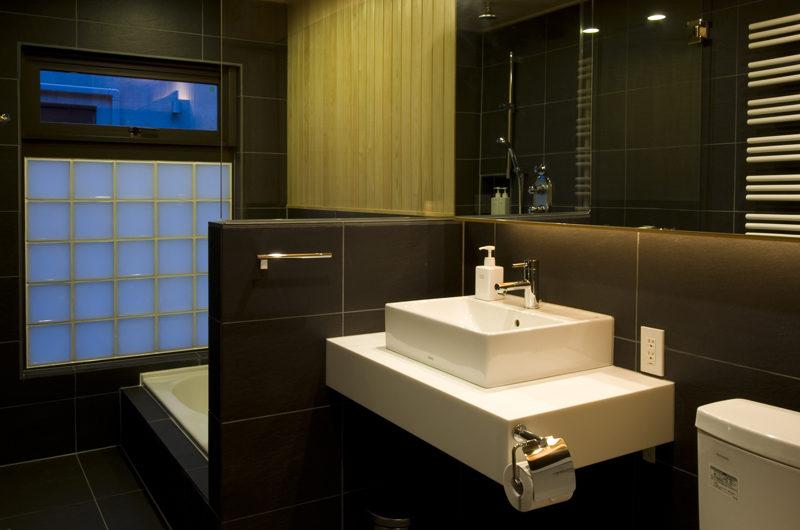 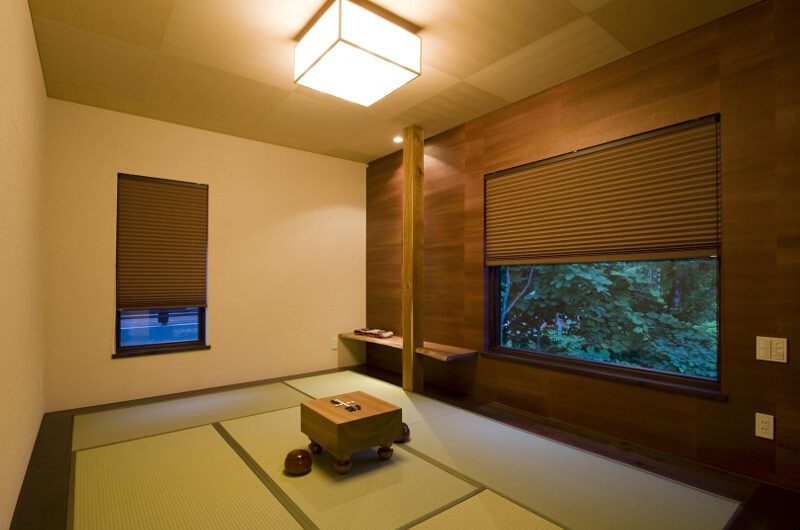 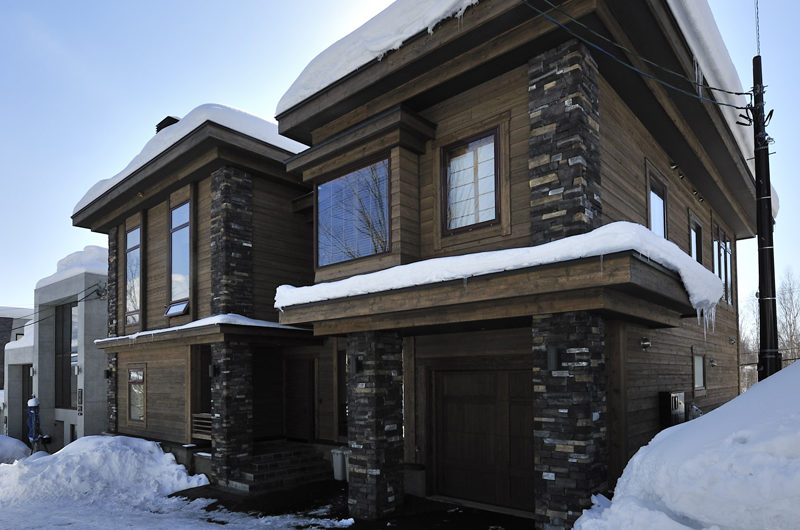 Enju is one sexy Niseko chalet tucked away in a private little enclave in the middle of Hirafu.

Enju takes its name from the native Japanese hardwood routinely used as the centre post in traditional Japanese straw matting tatami rooms. The timber has been used extensively throughout in furniture, railings, stairs and posts. A staircase of enju and walnut rises through the centre of the home allowing in natural light throughout its three levels.

Enju is part of developer West Canada Homes’ stable and reflects their trademark quality, style and space – all 360sqm of it. Built over three levels, the chalet features oak, alder and spruce as well as the enju and walnut. The basement media room has a state-of-the-art entertainment system including complimentary high-speed internet and iPod dock.

Enju is lavishly serviced with bathrooms with all bedrooms having their own ensuites. In addition, there are two extra toilets – one on the middle level and one on the top level – and a family Japanese-style onsen bath which can fit four people, on the basement level. There is also a stand-alone laundry on this level. The expansive living area is located on the top level and flows open-plan style from kitchen through to dining and lounge with its welcoming log fireplace. The kitchen also opens to a wide balcony.

The first bedroom is on the basement level, featuring either 1 king double or 2 single beds and sleeping up to two guests. The basement bedroom has an en suite bathroom with a toilet and shower. This room connects to the downstairs media room, with a sofa suite and high end entertainment gear. The basement floor also has a dedicated laundry room, and the feature bathtub in the Japanese style (fragrant Hinoki wood included).

The second bedroom is located on the ground level and mirrors the third bedroom. This room has traditional Japanese straw mat flooring and sleeps two guests in two single futon style mattresses. These mattresses can be packed away during the day, giving each room a second use. There is an en-suite bathroom with bathtub, shower, and toilet.

The third bedroom is located on the ground level, and mirrors the second. The room is in a traditional Japanese style, with straw mat flooring and room for two guests to sleep in two singles futon style mattresses. These mattresses can be packed away during the day, giving each room a second use. This room has its own en-suite bathroom with bathtub, shower, and toilet.

The fourth bedroom is on the second level. Windows look out from two sides of the building with lower village views all around. Bedding can be arranged as either 1 king double or 2 single beds according to your choosing. There is ample storage and an en suite bathroom with bathtub and toilet.

The fifth bedroom is on the second level, sharing the floor with an open-plan kitchen, living and dining area. There is 1 king double or 2 single beds according to what you need, and also a small desk workspace to help you get your work done. A walk-in wardrobe provides storage, and the en suite bathroom faetures toilet, two faucets, a shower and bathtub.

Enju is situated pretty much right in the centre of Hirafu Village, just below the central traffic lights that mark the village crossroads. Just a short walk down in Hirafu Middle Village, there is hidden slip road that ducks up to a secluded street full of huge luxury chalets, where you will find Enju.

Enju is within five minutes’ walking distance of the ski lifts, but more importantly only two minutes from the free shuttle bus. But with the option to garage a car, all transport issues are taken care of.

While the family-size onsen, log fireplace, and cosy luxury ambience of Enju would be hard to leave after an exhausting day, the nearby apres-ski temptations of Hirafu can prove irresistible. Just a short walk downhill is the Fridge Door Bar, Ebisutei Restaurant, and Restaurant Yo; while just a short walk up the hill is Niseko Pizza, Green Farm Café, TNSC Cheese Fondue and Crepery, Dragon Restaurant and Wine Bar and Niseko Cellars. And that’s just within the first 100m! Beyond that and your options are almost endless.

Be the first to review “ENJU” Cancel reply