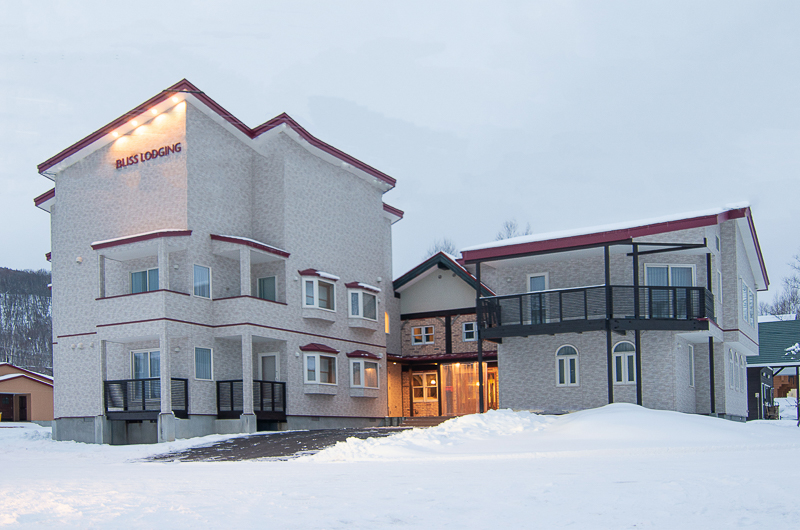 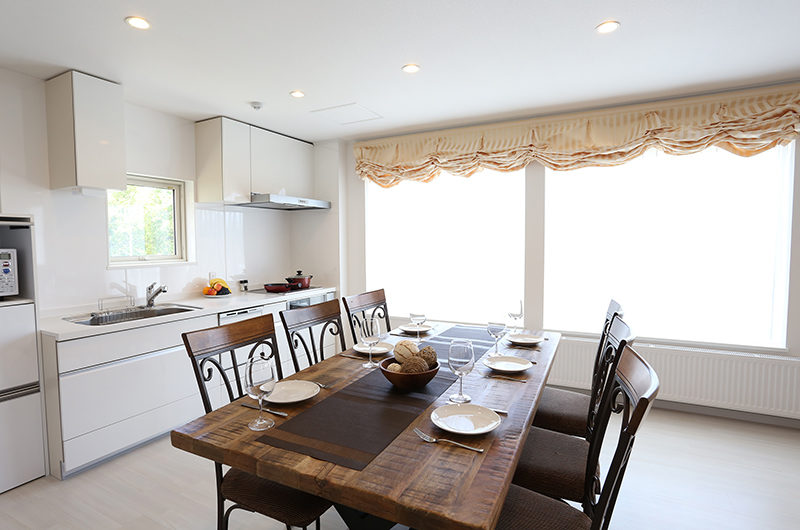 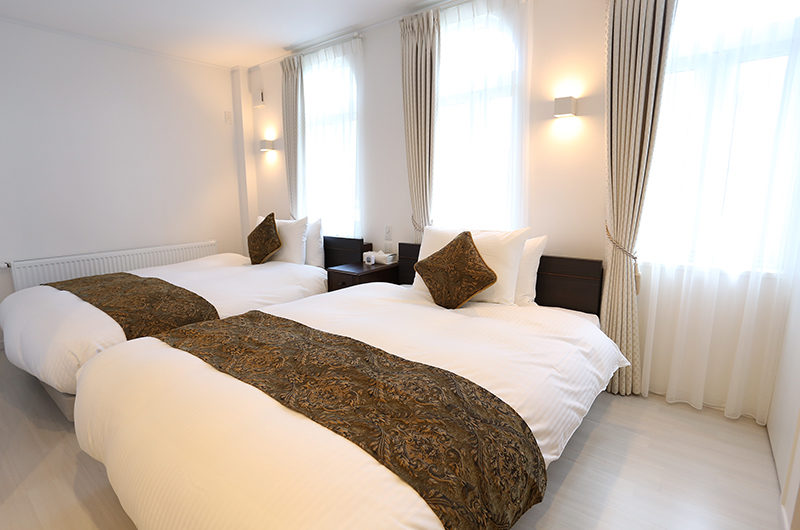 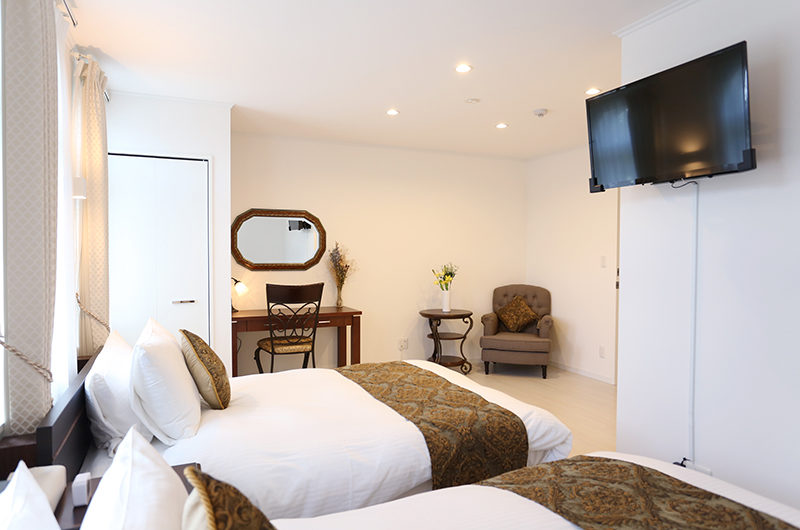 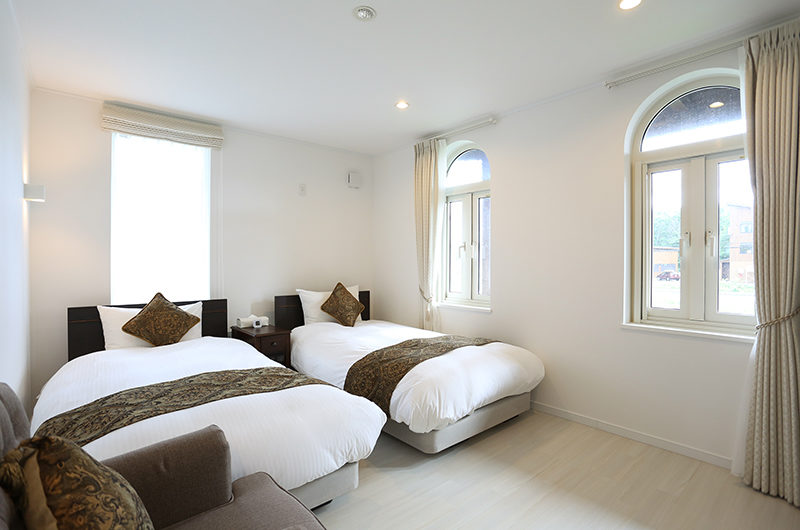 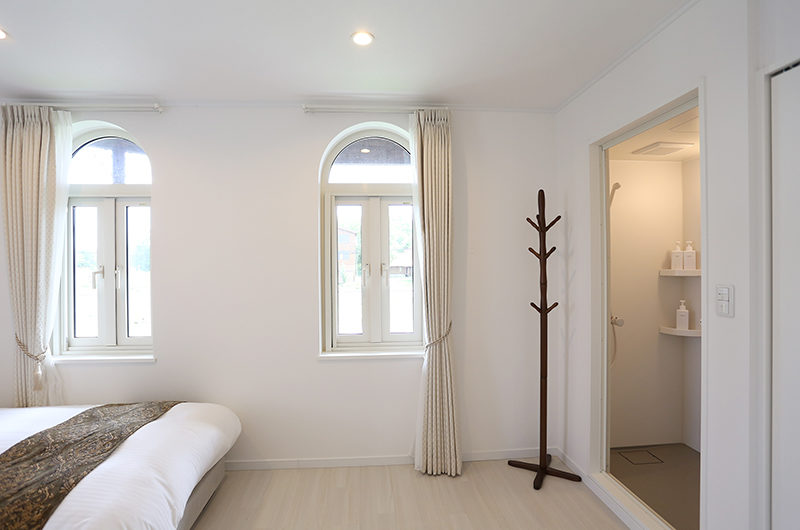 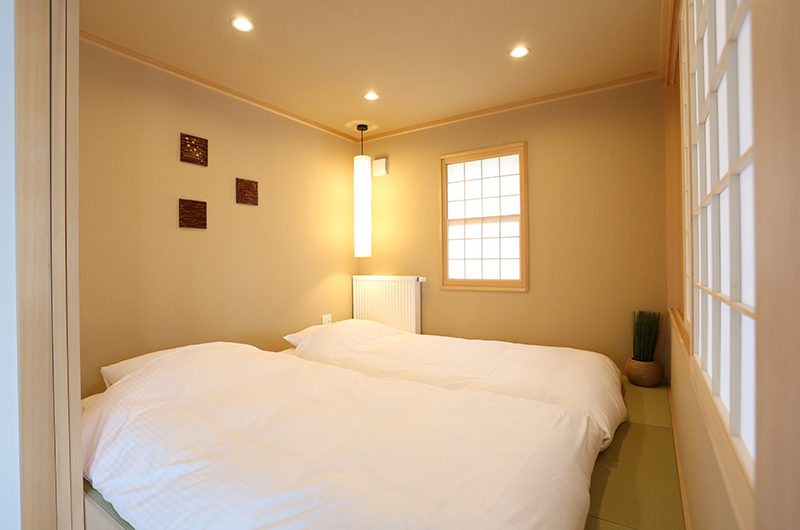 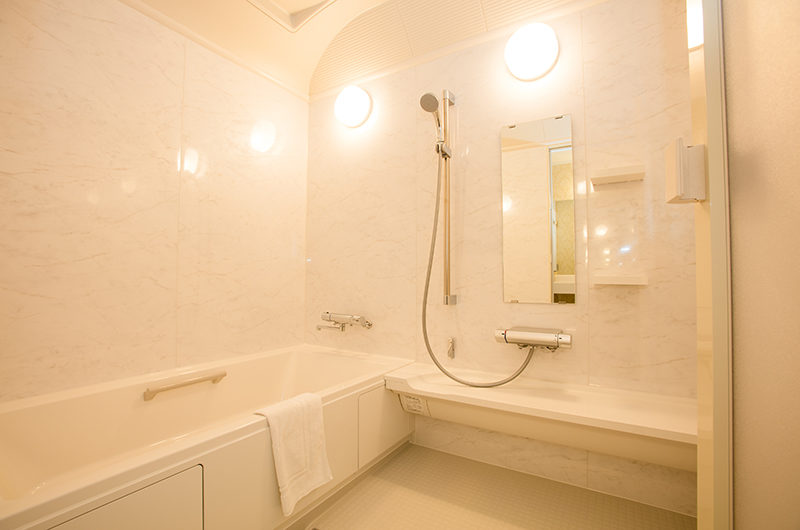 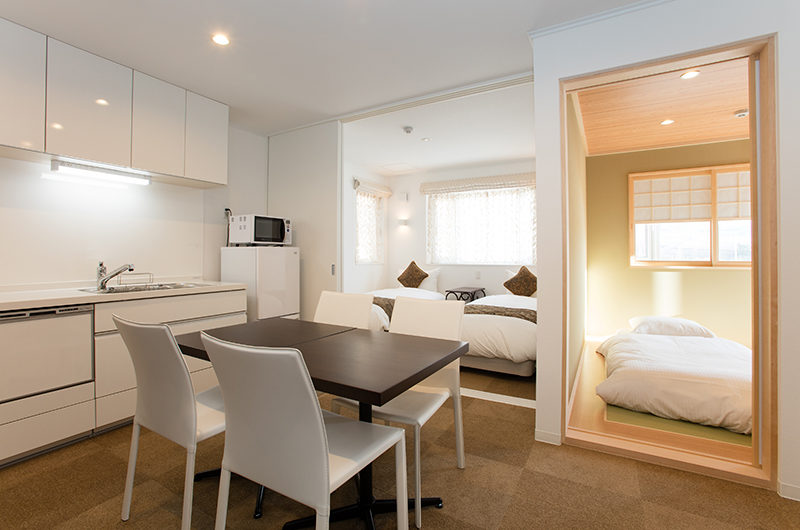 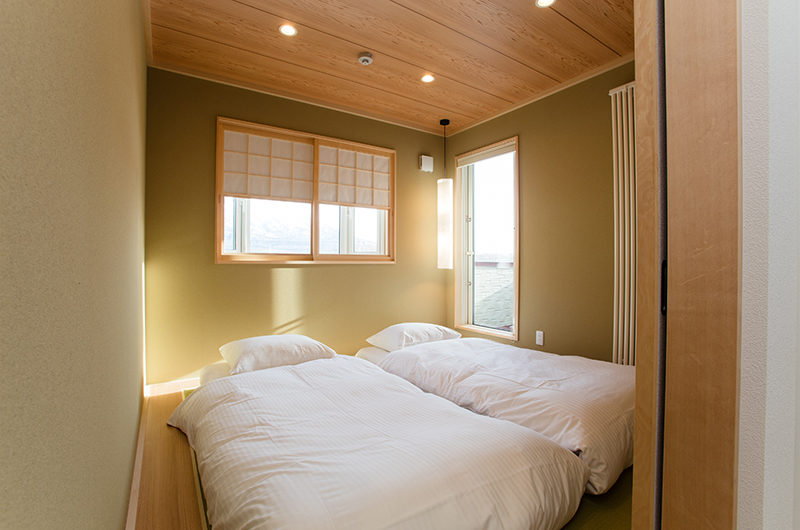 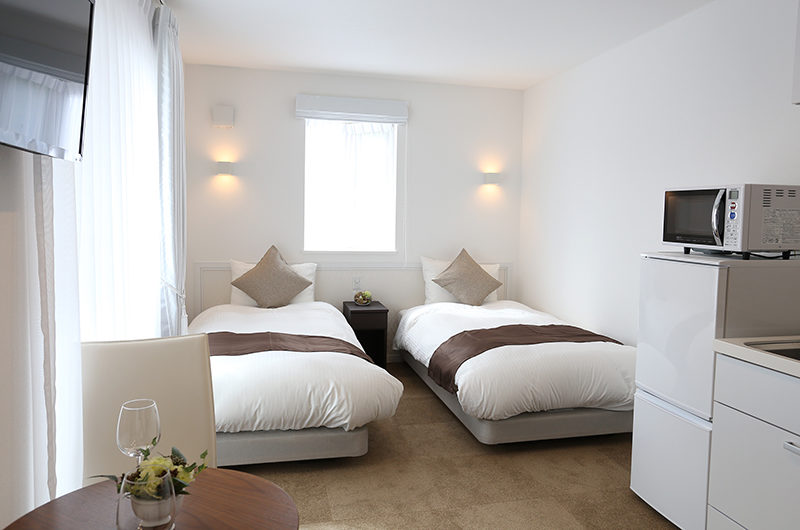 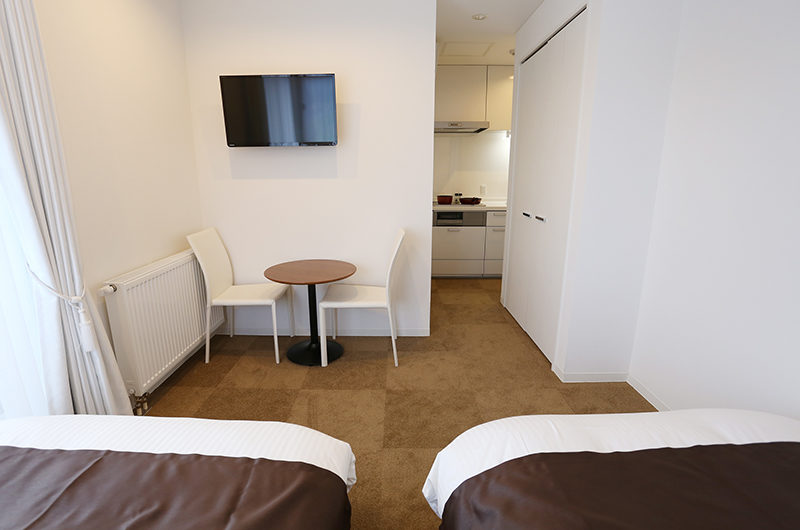 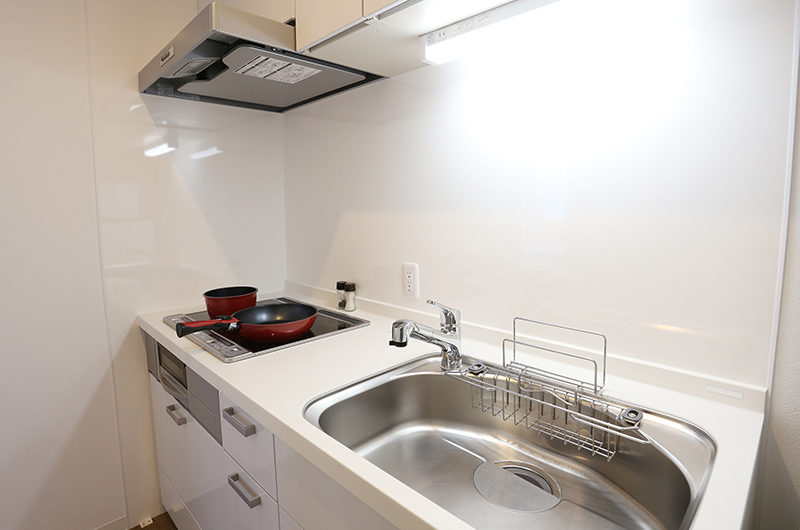 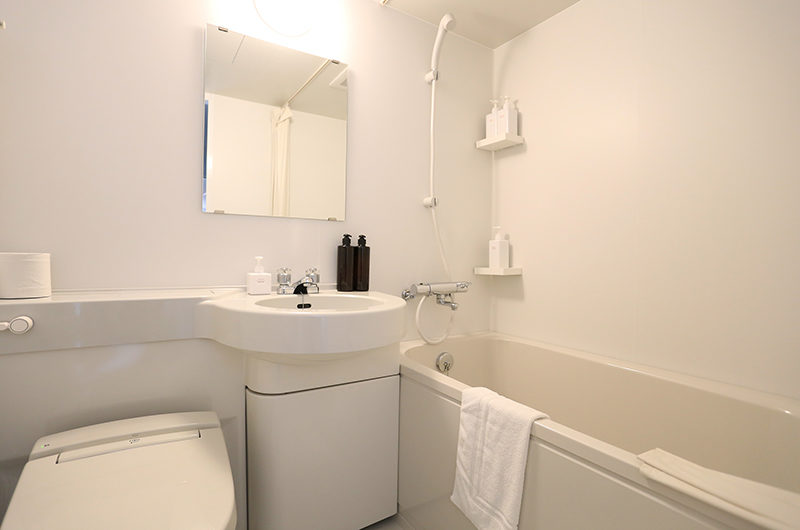 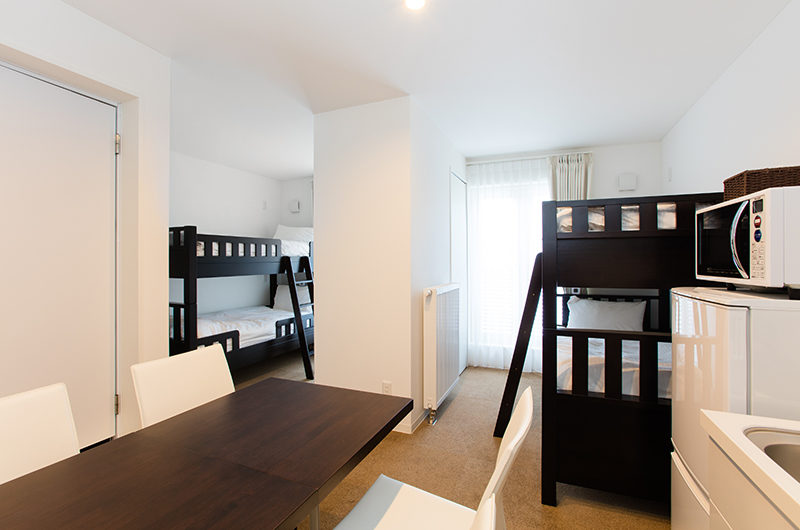 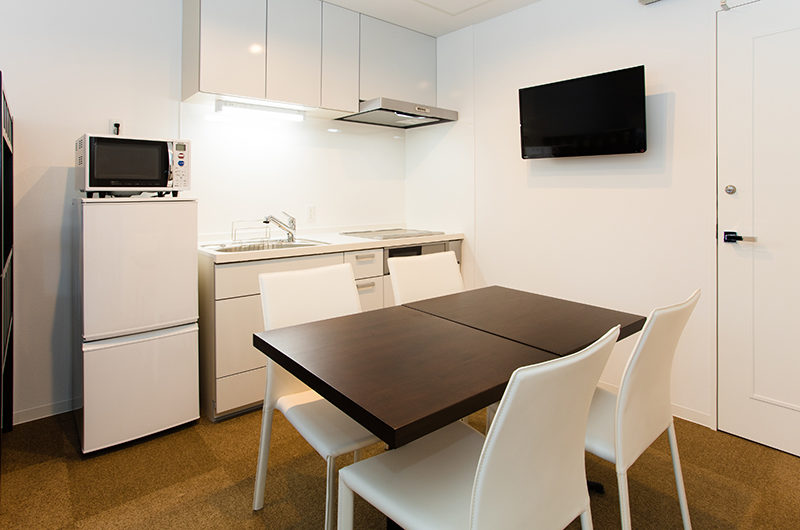 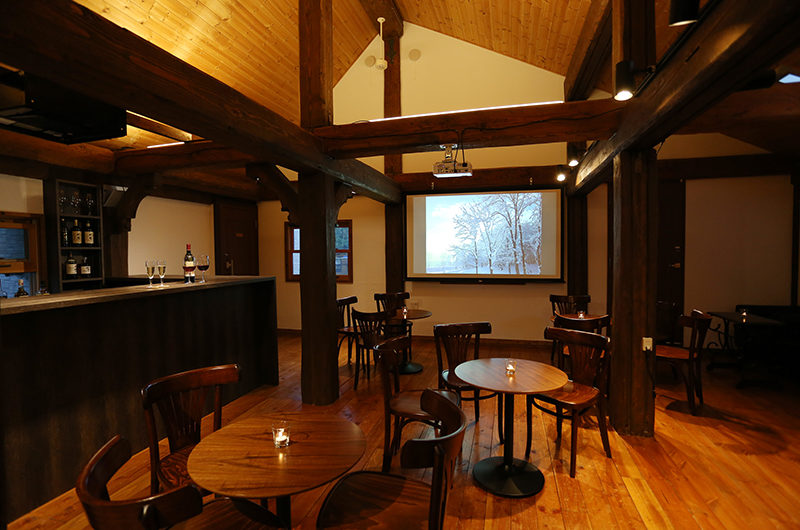 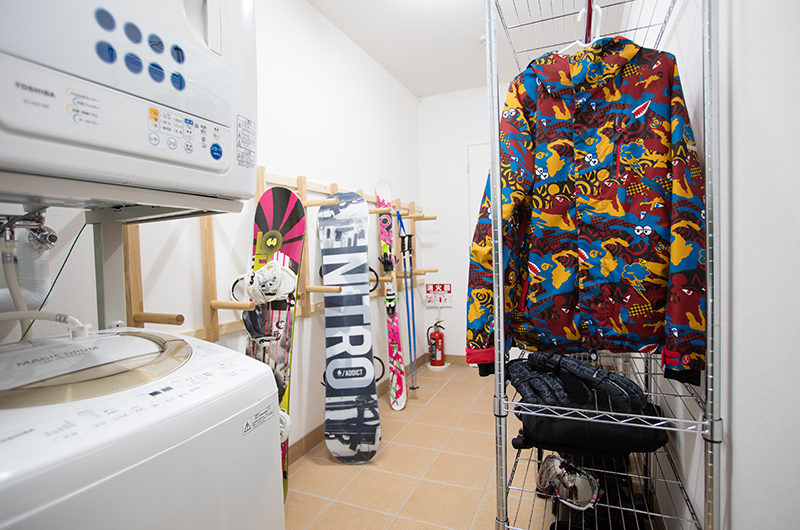 Bliss Lodging is a large, recently renovated lodge which houses a number of different room options.

Bliss Lodging is a charming lodge managed by warm and helpful Japanese staff who will make you feel like family – perfect for those looking for an authentic cultural holiday experience. Just a short shuttle bus ride from the centre of the action in Hirafu and recently refurbished to modern Western accommodation standards, Bliss Lodging is sure to delight every travel party. Bliss Lodging is a condominium but feels very much like an intimate boutique hotel. It’s made up of a condominium wing with several different apartment configurations sleeping two to four people, and an annex with a two-storey, three-bedroom apartment for larger groups of six to eight.

Rooms are bright, light and airy with modern finishes and traditional Japanese features throughout. Every apartment type throughout the building has a fully-equipped kitchen and private bathroom, most with bath.

For those who like to socialise and mingle with fellow travellers, there is a fantastic common lounge and bar with a projector for guests to use. Staff host regular fun nights where guests can learn how to make Japanese noodles or savoury Japanese pancakes (okonomiyaki) and also cultural celebrations for New Year and traditional Japanese holidays. 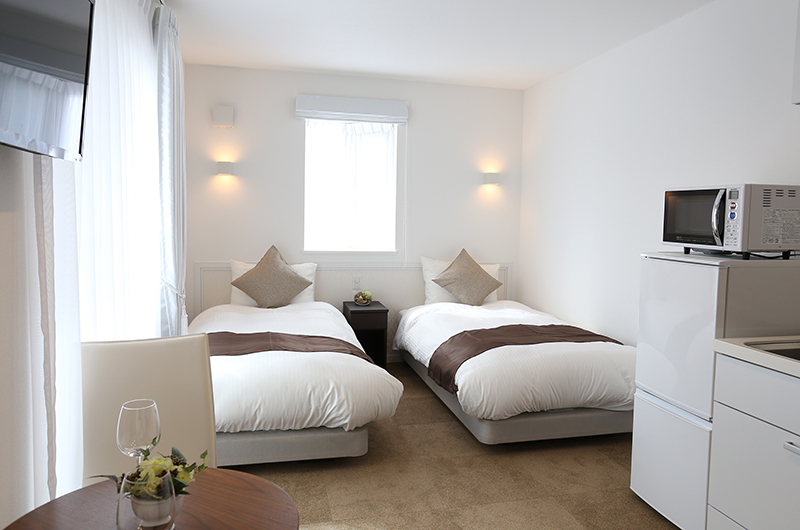 An airy, modern apartment with modern fittings throughout. Two single beds sleep up to two guests, and connect straight to a fully-equipped kitchen. Includes a small table with seating for two. 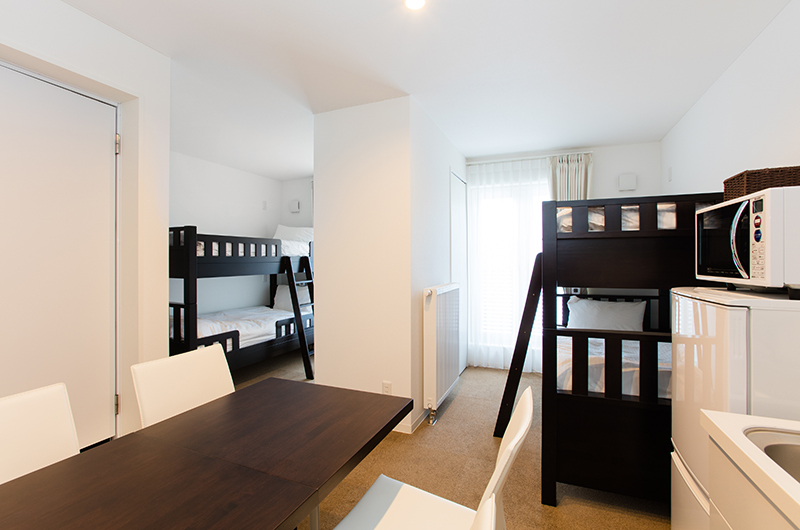 Up to four guests can sleep on two bunk beds. A fully-equipped kitchen, fridge and microwave sit next to a dining table that seats four. 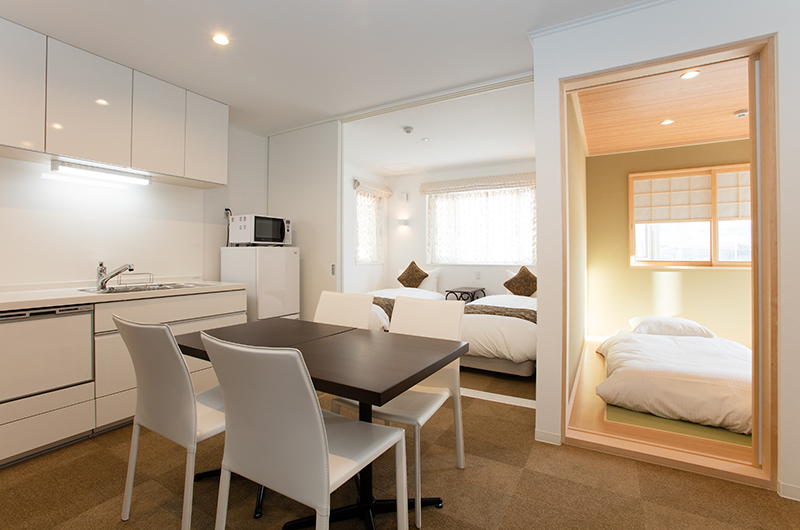 Bliss lodging is situated within a quiet, spacious accommodation village area of East Hirafy called Izumikyo II. It’s outside the buzzing center of town – enjoy instead vistas of Mt Yotei and Annupuri across snow-covered farm fields around the lodge.

Bliss Lodging offers a private guest shuttle to the lifts at 8.20am and 8.40am, and otherwise the free shuttle bus stops right outside the lodge. The free buses to Hanazono in the other direction also stop here – the base of Hanazono is the best kids play area in Niseko (and also offers amazing advanced powder skiing).

There are a handful of truly great restaurants within a walking distance – in particular be sure to try flame-grilled Italian restaurant Bion and soup curry restaurant Tsubara Tsubara. Or take the free shuttle into the village centre where you’ve got 100+ more options for wining and dining.

Please note all information provided is representative and subject to change. If there are features or services that are imperative to your stay, please check with us and we can confirm.