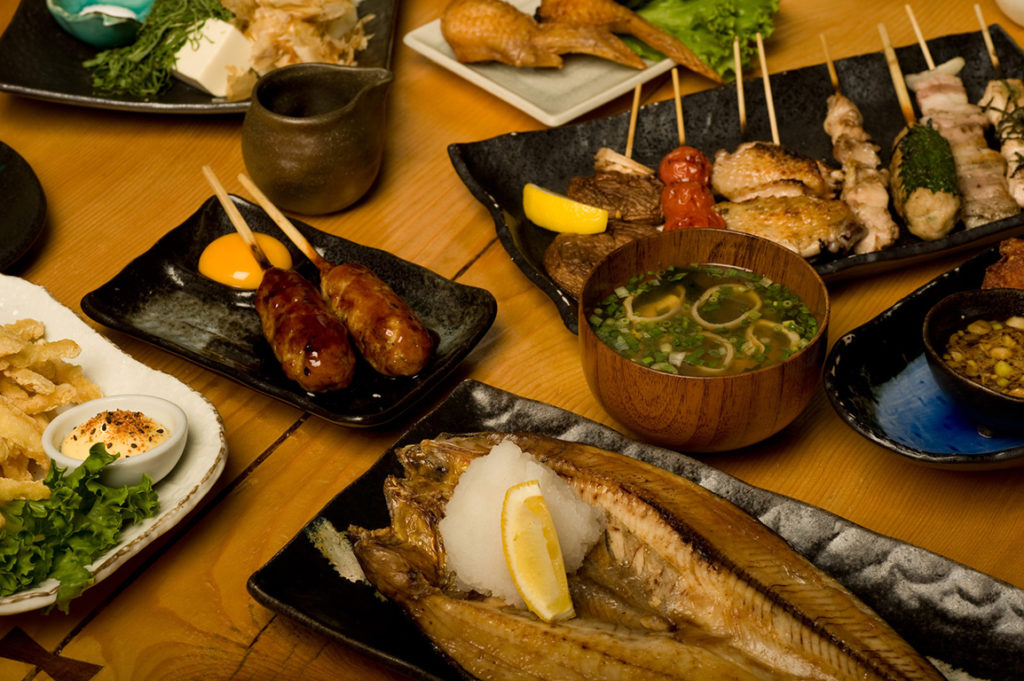 A-BU-CHA – the cute little cottage perched on the corner of Hirafu’s main intersection – is so good Niseko needed a second. Last season, they added A-Bu-Cha 2, located beneath the stylish Suiboku building, just up the street from the original.

The drink selection is the first thing that requires tackling. The original A-Bu-Cha boasts an impressive 250 offerings, while A-Bu-Cha 2 has an astounding 400. A plate of plump and juicy edamame (soy beans) to accompany our drinks is first on the cards.

Now for some Zangi. We’ve heard so much about this delight, we’re looking forward to trying it for ourselves. It’s like a kara-age chicken – big juicy bits of chicken thigh that taste like they’ve been steamed first, then coated and fried. Some of the best kara-age we’ve eaten.

Another option on the fried side, tonight we have chosen the shrimp and perilla spring roll. Perilla – or shiso – is a Japanese herb, and is wrapped with plump prawns in a crispy spring roll wrapper.

Meat on a stick never goes astray, so the next to arrive is buta (pork) kushi. Grilled over coal, the outside is deliciously crisp, just encasing the soft tender meat that is generously seasoned with Hokkaido salt.

We were intrigued by the ‘Chicken Wing in Gyoza’ on the menu. It arrives and looks to be a beautifully golden, crispy fried chicken wing. But then we bite into it. Oh-my! It is indeed a gyoza (like a dumpling) inside a chicken wing. The gyoza is stuffed with pork mince and garlic chives, and is somehow contained within the de-boned chicken wing. Fascinating!

And then the piece de la resistance: the grilled Hokkaido chicken, which can only be described as ‘mouth-watering’. This would definitely be grass-fed, grain-fed, massaged with virgin coconut oil, only drank pure Kyogoku spring water and Hokkaido sake, feet never touched the snow, feathers combed daily, free-range chicken if we’ve ever tasted it!

The menu at both A-Bu-Chas has enough to keep you busy for many trips to come. Hokkaido specialties like butter corn and potato butter, as well as inspiring interpretations such as Japanese fish and chips. The Kim Chi and pork hot pot is robust, while the Ishikari version with salmon and corn, a little more delicate.

There’s now a small selection of desserts available, that all come from the ever-popular A-Bu-Cha bakery. The cheesecake is definitely a winner. There’s sure to be something for everyone at A-Bu-Cha.