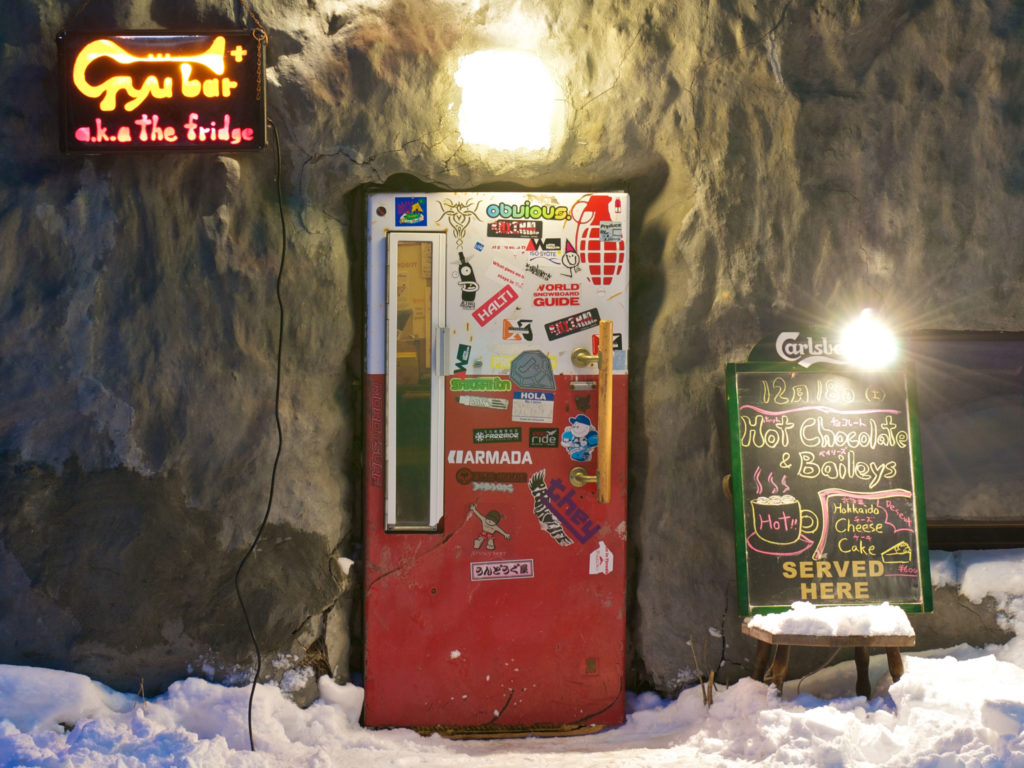 Intrigued faces wander off the street into the quirky doorway of Gyu+ Bar – aka Fridge Door Bar – in Hirafu’s lower village.Their eyes light up as they duck through the low entrance, pass the piano and look into this endearing bar.

Records are neatly stacked on shelves, interesting lights drop down from the ceiling, hand-picked Japanese whisky lines the bar and the glass window at the back perfectly frames the snow-covered tree outside. Gyu+ Bar is really relaxing, warm and comforting – like a friend’s lounge room that’s been decorated with the things that they care most about. Its owners Hisashi Watanabe and Ioanna Morelli, whose enthusiasm and passion for providing something unique to the area, have made Gyu + Bar one of Hirafu’s most popular drinking holes.

People thought Hisashi was crazy when he bought a piece of land 12 years ago in Hirafu’s lower village. At the time, Hisashi didn’t have much money and constructed the bar and house attached to it himself.

If Hisashi had listened to those people around him, he may have never started his bar, met his wife Ioanna or created their summer business, Pelican Burger in Kutchan. Attracted to the tree that you can see through the glass windows in the bar, Hisashi acted on a hunch, and with a bit of luck, creative thinking and the help of his wife, he has created a cult following of visitors and locals in the area.

Like most people that visit Niseko in the winter, Hisashi and Ioanna came here to ski and snowboard. The access to powder snow and mountains in Hokkaido made Sapporo the ideal place for Hisashi to embark on his life as an economics student 17 years ago. Ioanna tells a similar story: “I came here to snowboard five years ago. My friend wrote me an email and said it was just dumping in Japan and that I should come here. I met Hisashi in the summer and we dated for about two weeks then we decided to get married in October and I’ve been here ever since.”

Since their paths crossed the pair jokes that “they’ve been together for 24-hours a day.” Most would warn against getting married after two weeks, but gut instinct seems to work for both of them. This naturally strong partnership has evolved after many overseas trips and working together on their small businesses. This year alone, they have taken trips to Spain, Portugal, Morroco, America and Canada.

It’s travel and seeing how other people run their businesses, which fuels their passion. Recently they went to New York’s hipster capital Williamsburg, which like Niseko, is frozen in transition. The number of young people who own businesses there and the comfortable scale on which they operate inspires Hisashi and Ioanna. In the future, they would like to see more young people, starting up businesses in the Niseko area. Hisashi says, “I hope I will inspire other people to start things, especially young Japanese people. Niseko has a lot of potential.”

Taking time out to enjoy travel, art and mountain life is what Hisashi says is the key to their success: “Don’t just own a business you have to be involved in other things and be a part of other things around you. If you only think about your business you won’t be successful.” Being able to find this time is something Ioanna puts down to scale, “We’re happy just having this place. Sometimes, people overestimate what kind of scale is comfortable. This is the scale that works well for us.” Hisashi also relaxes by illustrating and writing his own children’s books – his first Tori no Shacho is proudly on display at Gyu+ Bar.

Controlling scale is a factor they believe will influence the success of the area, and how individuals cooperate both internally and externally with other places in Japan. Ioanna muses, “The town has to try and attract more talent in terms of professionals living in the area. It has to offer something to those people. And the only way that that can happen is to try and attract domestic tourism. As well as people that are doing things other than skiing. People like Kamimura for example; people that are doing something in their field.”

Hisashi would also like to see more art and culture in the area so that more people will stay year round, “like a winter film festival, but not just about outdoor life.” They both believe that this outdoor lifestyle needs to be complemented with something cultural. “Niseko used to be a backpacker, skiing place, which was okay because everybody would leave after the season, but now people want to live here, which means people need something more.”

With Gyu+ Bar and Pelican Burger, Hisashi and Ioanna have definitely stamped their own style on the area. By having businesses in Kutchan and Hirafu, Hisashi and Ioanna have noticed their role in linking the towns and cultures together. In the future, they believe Kutchan is on the verge of connecting with the foreign community. Ioanna explains, “Kutchan has a great link to the outside world because of the skiing in Hirafu. We hope that other people start businesses here. Not us – we have enough.”

Their final words of advice to those who might want to start their own business in the area comes as no surprise then – “Kutchan is an interesting place, so start a business in Kutchan.”