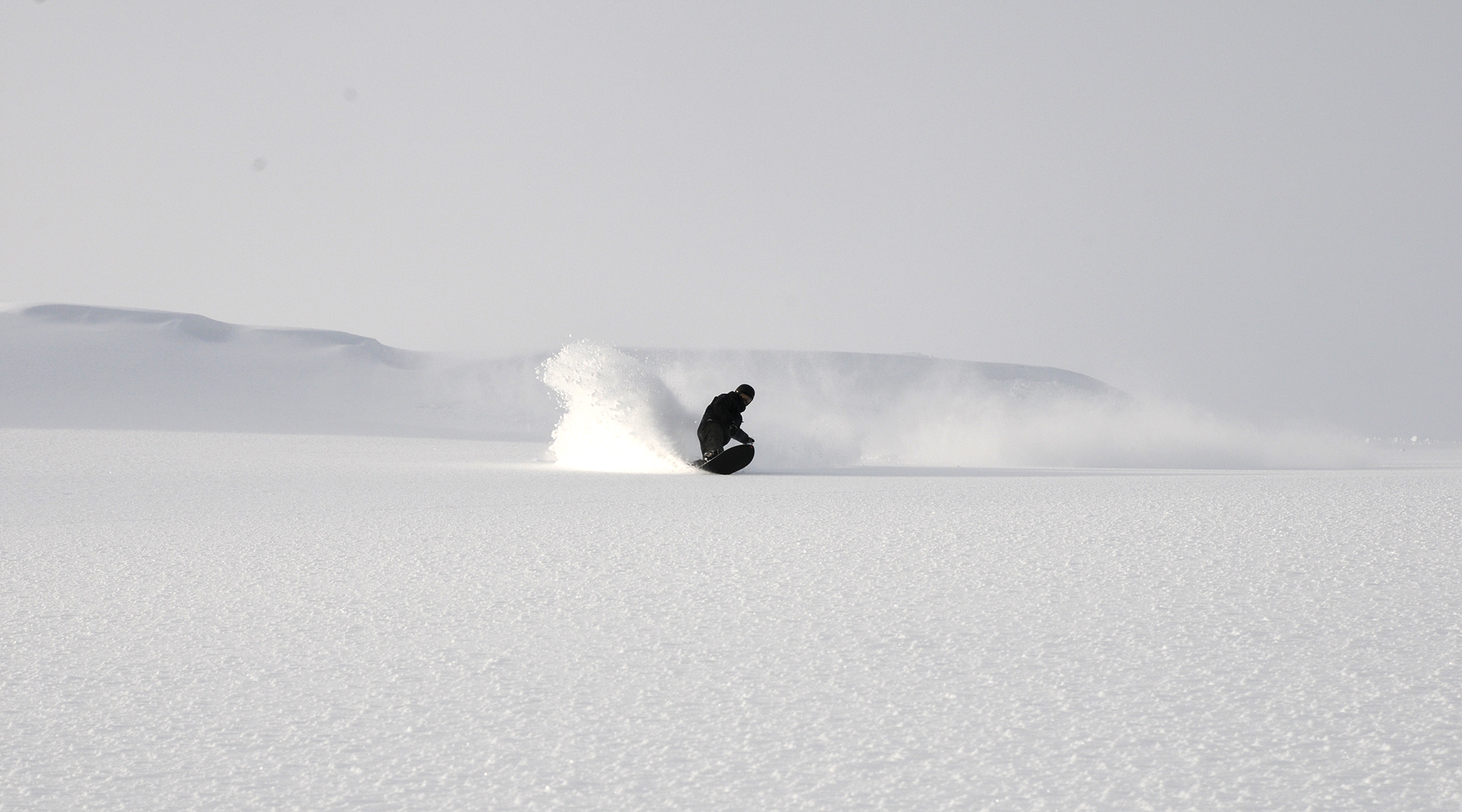 A recent poll listed experiencing the local food as the main drawcard for 71% of tourists to Japan. But what ends up leaving the most lasting impression for so many is the Japanese people themselves. They’re impressed by their courtesy, consideration for other people and space, and in particular their absolute commitment to excellence.

This unwavering attention to detail has seen Japanese companies triumph internationally in manufacturing and create clockwork precision in running a country of 120 million people living in a space smaller than California.  Most visitors to Niseko have either heard of, or dined at, the Gentem Café – or as it’s commonly know: the ‘Mongolian Tent’. What most people don’t know is that the café is an offshoot business for Gentem’s raison d’être – Gentemstick – the most innovative and, many would say, best snowboards in the world. 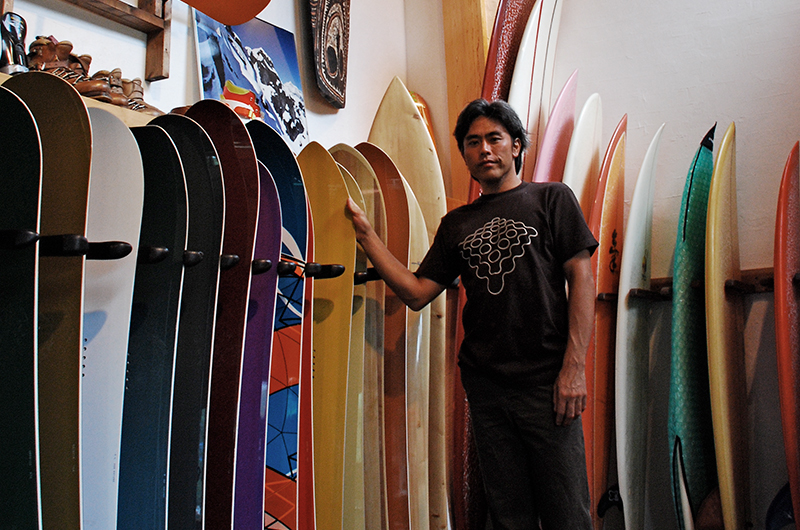 Gentem means ‘things that exist in northern space’ and also ‘the natural way’, perfectly surmising the philosophy of the company.

The company exemplifies the Japanese commitment to excellence. Gentem is the brainchild of Taro Tamai, a surfer from Tokyo who relocated to Niseko in 1991. Tamai-san began snowboarding in 1983, when the nascent sport attracted a nucleus of surfers experimenting with ways to slide down a snow covered hill on a piece of wood. “When I was surfing I used to think ‘why can’t we do this on the snow’,” says Tamai-san. “And then I found out people were already snow-surfing in the US, so I wanted to try it.”

One grass roots snowboarder; US-based surfer Dimitrije Milovich, teamed up with Wayne Stoveken, a New Jersey-based snowboard shaper (believed to be the first person ever to snowboard), to develop his idea of “surfing on snow”. Milovich created one of the first snowboard manufacturing companies, Winterstick. Together Milovich & Stoveken created the classic ‘Winterstick Swallowtail’ snowboard, shaped very much like a surfboard, complete with pointed nose and flat or slightly reverse camber. The Winterstick swallowtail is still much sought-after and is completely at home in Niseko’s powder.

In the mid-80s a worldwide skateboard boom exploded which greatly influenced the way snowboards were designed, ridden and shaped. Snowboards no longer looked like surfboards and the pointed nose, swallow tails and flat or reverse cambers were abandoned. Snowboards began to look like large skateboards with the wheels taken off. Spinning, rails and half-pipes became all the rage as snowboarding somewhat distanced itself from its surfing roots. Winterstick kept making their surfboard-inspired boards but eventually, because of the shift to skateboard-influenced snowboarding, buyers dried up and they fell into serious financial trouble in 1998.

Meanwhile in 1998 Tamai-san felt stronger than ever that for him snowboarding was still about surfing and the feeling of making a surfing-style slash or cutback through powder. So he decided if that he owed it to himself, his friends and Milovich, to revive the tradition of snow-surfing. So he shaped and released the first ever Gentemstick. Tamai-san had previously worked for Japanese brand MOSS snowboards as a tester and designer but had always wanted the chance to release his own snowboards. Niseko was the perfect place for snow surfing’s revival. As any surfer would know, ploughing through powder is like surfing on an almost endless wave, and there are so many powder days the parks in Niseko often see little use.

Through good timing, marketing or – most likely – the Japanese dedication to design and attention to detail, the Gentemstick was a big hit with riders the length and breadth of Japan. The graphics are understated, each model has only one colour on the deck which varies from season to season. Every board has a solid black base with a red teardrop shaped dot on the underside of the nose. The shape varies widely across their line up, with the only constant being that they do not look like any other boards. The Gentem freestyle board Indystick has a cut-off nose to keep it light and, make it look cool. The larger boards have a pointed nose designed to direct the dry powder away from the rider’s face when turning. Face shots are fun, but it’s not ideal having your vision taken away in tight trees. A wide variance in the camber of the board makes turning a unique experience all over again. Perhaps because of the image of a surfer on a Malibu turning extra slowly, there is a common fallacy among snowboarders that the longer the board, the more difficult it is to turn. But in reality rapid manoeuvrability in a board is a combination of many factors. Gentem pays stringent attention to camber, shape and flex-pattern so even their longest boards can be whipped around easily.

Gentemstick’s resident pro-rider Tomoki Takaku has been living in Niseko for 10 years since relocating from Kanagawa, near Tokyo. Considered one of the best riders in Japan, Tomoki has roamed the world for the past nine years, riding Alaska every spring after the Niseko season. His weapon of choice is the flat-camber TT model, named after Tamai-san. He loves the way flat-camber boards turn. “I now find myself looking for mountains that suit the flat camber board and returning to those places again and again,” he says.

As skiers and snowboarders the world over are starting to appreciate the sheer joy of riding powder snow, the equipment is still catching up with the powder phenomenon. Many skiers riding through Niseko powder soon discover their skis are too thin under foot and can’t get through the snow, just as many snowboarders unfamiliar with local conditions soon work out their boards are too short. Because of the rapid change in ski technology with the carving ski revolution, and the associated acceptance of new design, skiers have actually been somewhat faster than snowboarders to adopt powder-specific equipment. This can be witnessed by the number of skiers now clutching their fat-skis inside Niseko’s gondolas because they don’t fit in the racks on the outside. Conversely it’s not difficult to find non-local snowboarders riding freestyle boards through Niseko powder having to lean so far back in deep snow they need to give their back legs a break every few hundred metres.

Many Gentemsticks are designed specifically with Niseko’s snow conditions and terrain in mind, but they aren’t exclusively powder boards. Tamai-san and his riders have travelled the world searching for the best conditions. “Each Gentem board is made for a different situation,” Tamai-san says. “Our team has been travelling the world studying the snow in each different location. Some of them are perfect for Niseko powder but we also have one perfect for Alaskan conditions.”

Gentem’s underground purist image sees them only advertise in one publication – a premium quality Japanese pictorial publication ‘Fall Line’ and that ad generally features an artistic or panoramic picture with only a small Gentemstick logo alluding to the brand. Whether it’s their marketing campaign or the boards themselves, they sell out of their line-up every season.

Gentem’s meaning lends itself perfectly to Tamai’s business philosophy. The Gentem café first opened in 1999 just after the Gentemstick was released. “When I travelled to Mongolia for a snowboarding trip with Tomoki in the mid-90s we stayed in yurts and thought it was a great environment to be in with a group of people,” Tamai-san recalls. “Then we found a company in the States that sells them and decided to set up the Gentem Café.” The selection of south-east Asian food is not available elsewhere in Niseko and Hugo Weaving, among many others, have enjoyed dining there in the past.

Gentemsticks are, as they say, reassuringly expensive – prices begin at ¥100,000 for the board alone. The largest board, the Impossible, retailing for ¥178,500. Is one of the most expensive boards in the world.

Tamai-san reasons: “I think the material and labour prices in Japan add to the expense. But most of the expense comes from the demands we put on our manufacturer and the quality of the finish.”

Japanese consumers have a fascination with products that are made in limited numbers and Gentem buyers can be assured that only around 50 of each model will make it on the mountain. “We asked factories in Austria, Canada and other places if they could produce our boards, but they couldn’t meet our specific demands,” says Tamai-san. “The normal design process for making a snowboard is for the board engineer and designer to work together, but we think about the shape, flex, camber and other specs first. We then bring the idea to the engineer, who may not know how to construct it the way we’d like. So we need to research how to make the ideal board”.

All Gentemsticks are handmade in a factory in Niigata by craftsmen who select only the finest wood and pay the strictest attention to detail. The boards do not contain any high-tech equipment but as each board has varying flex and camber specifications, each board requires extensive individual attention.

The renowned Japanese attention to detail has seen the Gentemstick draw fans from across Japan, but the boards have yet to penetrate the international market. Type in ‘Gentemstick’ into a search engine and you’ll be lucky to find any matches in English. Some Alaskan and Canadian riders in the know order them over the internet but, by and large, they are a Japan-only secret. Plans are a-foot to expand their export market and a bilingual web site will be up and running soon. As Niseko’s international reputation grows it is likely that this unique snowboard brand will continue to grow too.

Got any questions about this post or anything else in Niseko?

Feel free to reach out and speak to our team and we will be happy to help. We can also help you book your accommodation and arrange all of the extras for your trip including transfers, lift passes and equipment hire so you can sit back, relax and start dreaming of fresh powder.