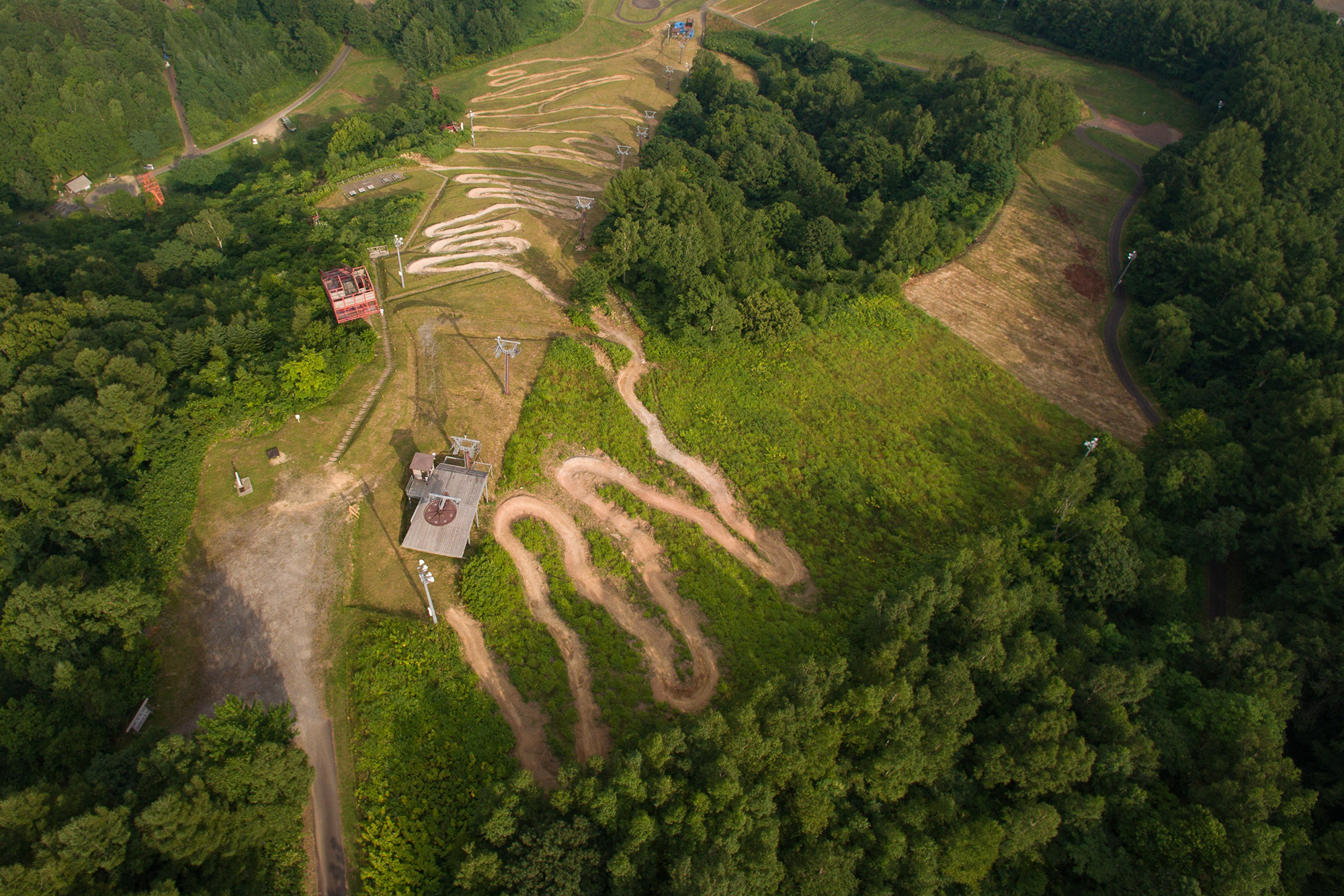 As the saying goes: “If you build it, they will come”.

And that is exactly what happened after a team of enthusiastic local mountain bike riders, with the help of a Swiss mountain bike resort planner, transformed an under-utilised summer ski slope into a thriving mountain bike arena.

Asahigaoka Park is located on the edge of Kutchan town just behind the train station towards the Hanazono ski resort. It has an abandoned ski jump and a single chair lift that can be ridden for ¥100 a pop in winter, but until last summer, the mountain was largely unused in the off-season.

Thanks to the foresight of local councillor Yoshi Tanaka, the development of a modern “flow trail” has turned the area into Niseko’s first vibrant mountain-biking hot spot, with dozens of mountain bikers of all ages and abilities congregating on weekends. 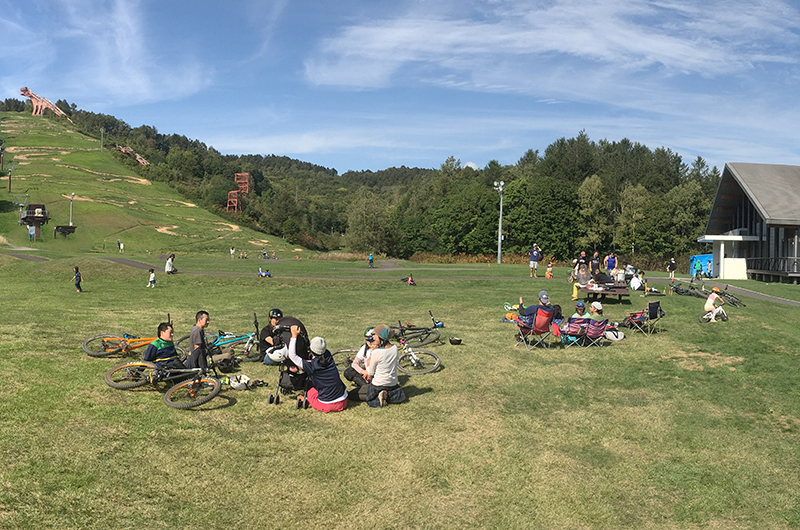 “The car park is full and families set up picnics at the base, while riders from their parties take turns heading up for a ride, and kids ride their own bikes around the base area.”

Flow trails are ingeniously designed to suit a wide range of skill levels from relative beginners right through to pros. Rather than heading straight down a steep mountain, the winding track allows for a gentle gradient featuring bumps, jumps and banked turns – almost like a terrain-based roller coaster – which riders can cruise down or attack according to their desire and skill level, with minimum pedaling and braking necessary.

Another key feature is consistent and predictable surfaces, meaning there is little risk of unforeseen obstacles or hitting a patch of gravel and sliding out, as is often the case on raw mountain biking courses. Flow trails are what you make them: leisurely rides with your kids where beginners can roll over dirt features and bypass technical ones, or an exploration of skills and airtime for fast, talented riders who want to turn the trail into the ultimate playground. 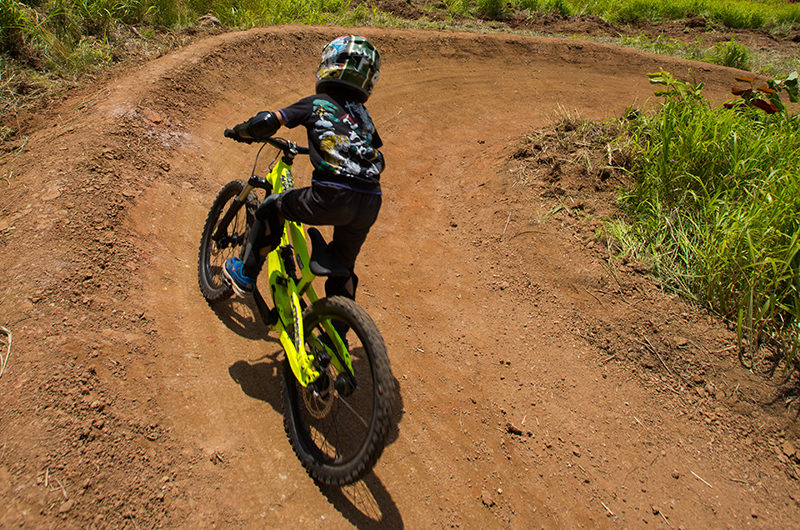 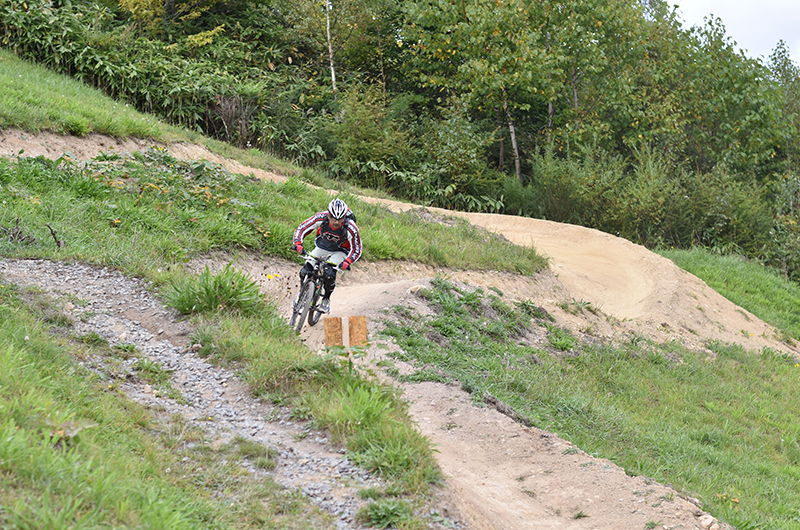 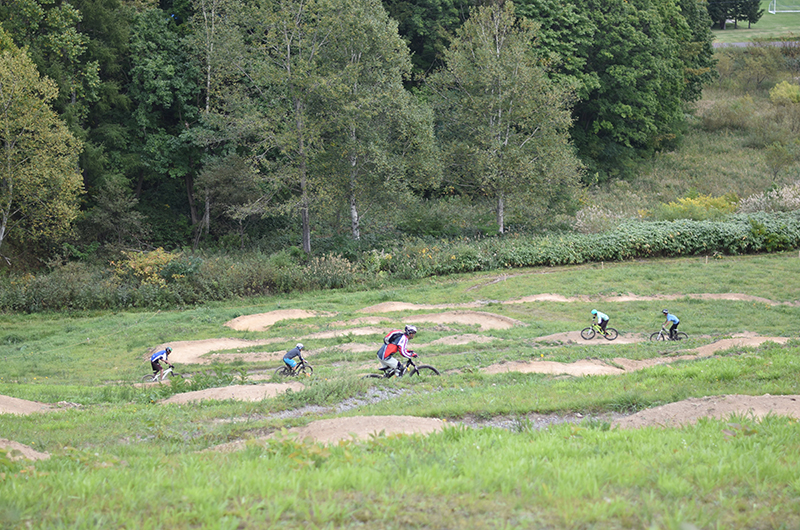 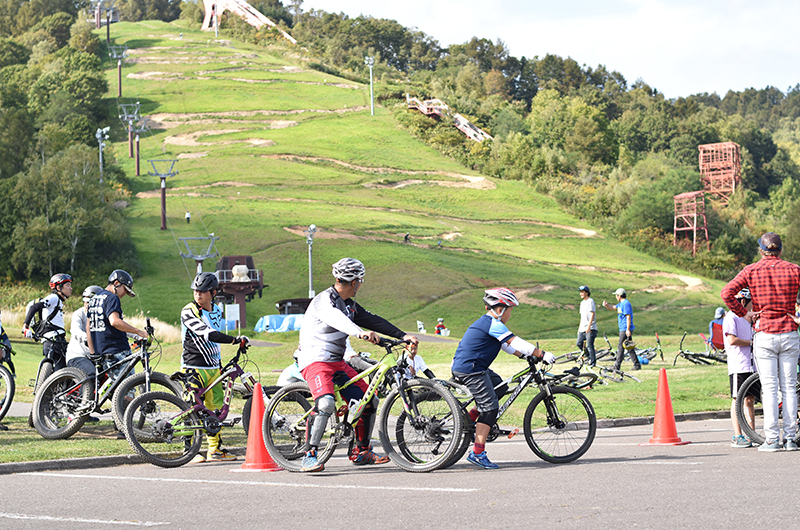 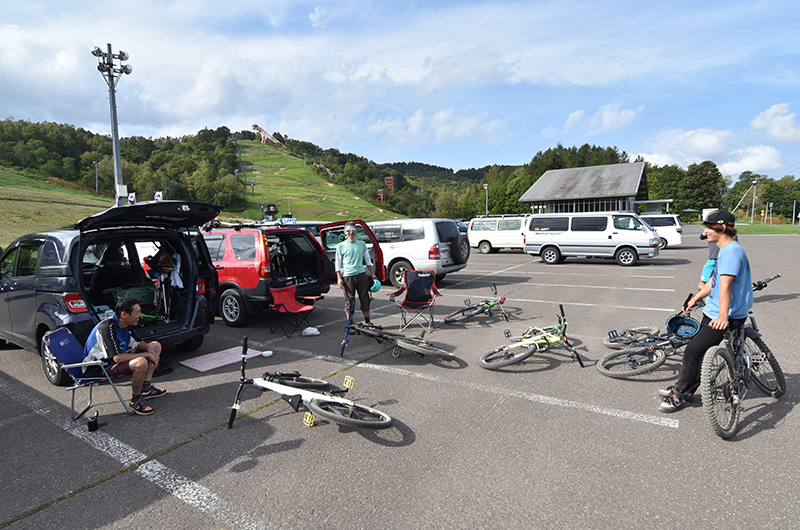 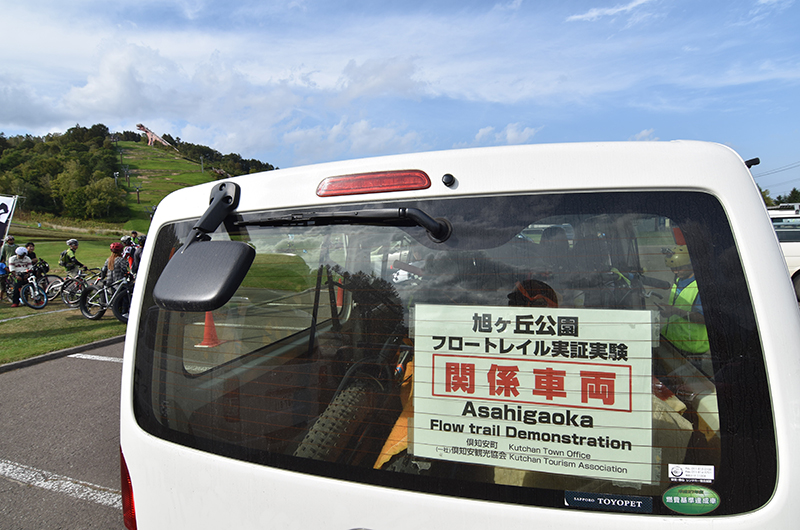 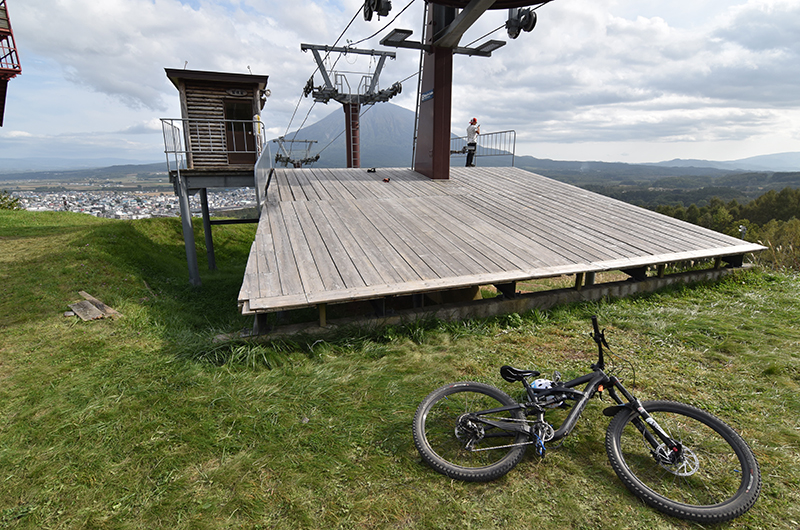 An enthusiastic and tireless group of local mountain bikers has been developing a network of trails and organising events in the Niseko United ski resorts every summer for the past decade. But high up in the mountains or deep in the forests, they have never really been accessible to anyone except relatively experienced mountain bikers. Not to mention virtually invisible and with little way to monetise them.

Enter the expertise of Allegra Tourismus, and almost instantly it feels like Niseko has a mountain bike tourism industry that will no doubt thrive in coming years, as has been its unfulfilled destiny to date.

Allegra director Claude Balsiger believes Niseko could make a name for itself as Asia’s premier mountain bike destination within five years – largely because it has little competition.

“If you look at the Asian market you’re already in pole position because you’ve got a name in winter for ski sports and action sports, and there’s nowhere else that promotes itself as an Asian mountain biking destination,” Balsiger says.

“Since you’re already a brand in winter, it’s easy to transfer that lifestyle to summer. If you set up a good business plan, it could be Asia’s most successful mountain bike resort within five years. Australia, New Zealand, North America as well as the Alps – they’re already far ahead in mountain bike tourism, but in Asia there’s still not much around.” 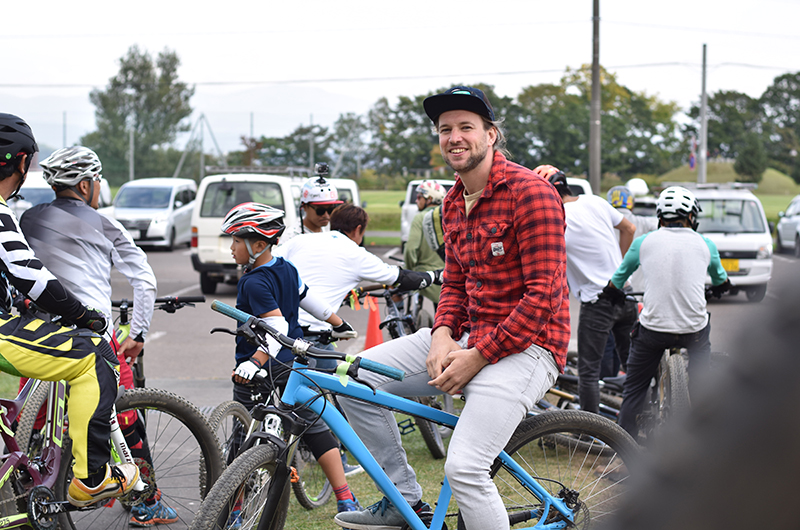 The vision for the trail came about after Tanaka-san visited St Moritz in Switzerland, the sister city of Kutchan (which is home to the Hirafu and Hanazono ski resorts) and Allegra’s hometown. Allegra has built three flow trails in the resort, and helped transform St Moritz and dozens of other resorts into viable year-round prospects thanks to their mountain bike tourism planning.

After Tanaka-san rode their trails, he knew Niseko needed a flow trail to boost the efforts of the local mountain bike fraternity. Allegra has drawn up plans for courses in Hirafu and Annupuri, but it was the tiny Asahigaoka ski hill that got Balsiger most excited.

“When I saw Asahigaoka I told Yoshi we have to do the first one here – this is the perfect location,” Balsiger says. “There’s a building for a café here already, a big car park, it’s really accessible, the train station is nearby. Since the elevation difference isn’t so big it’s not so expensive to build, and it’s also accessible for beginners. And you can see the trail from all over town – what better location could you have?”

What Balsiger saw in Asahigaoka, no one here had seen before. With a café at the base and the resultant crowds of young and old enjoying the area, the prototype at Asahigaoka demonstrates the foundations of the economic model.

“The base is where your value is created. You want to keep the mountain bikers close to where the shops and restaurants are. If you build a flow trail to the top of Hirafu with a five-degree gradient, it would be 14km long and would take the average rider two hours to get down. So they might only come through your value zone once or twice. If there’s a short 500m course, people are going to be down here every 15 minutes so they are much more likely to buy a drink or something to eat than on a very long trail.” 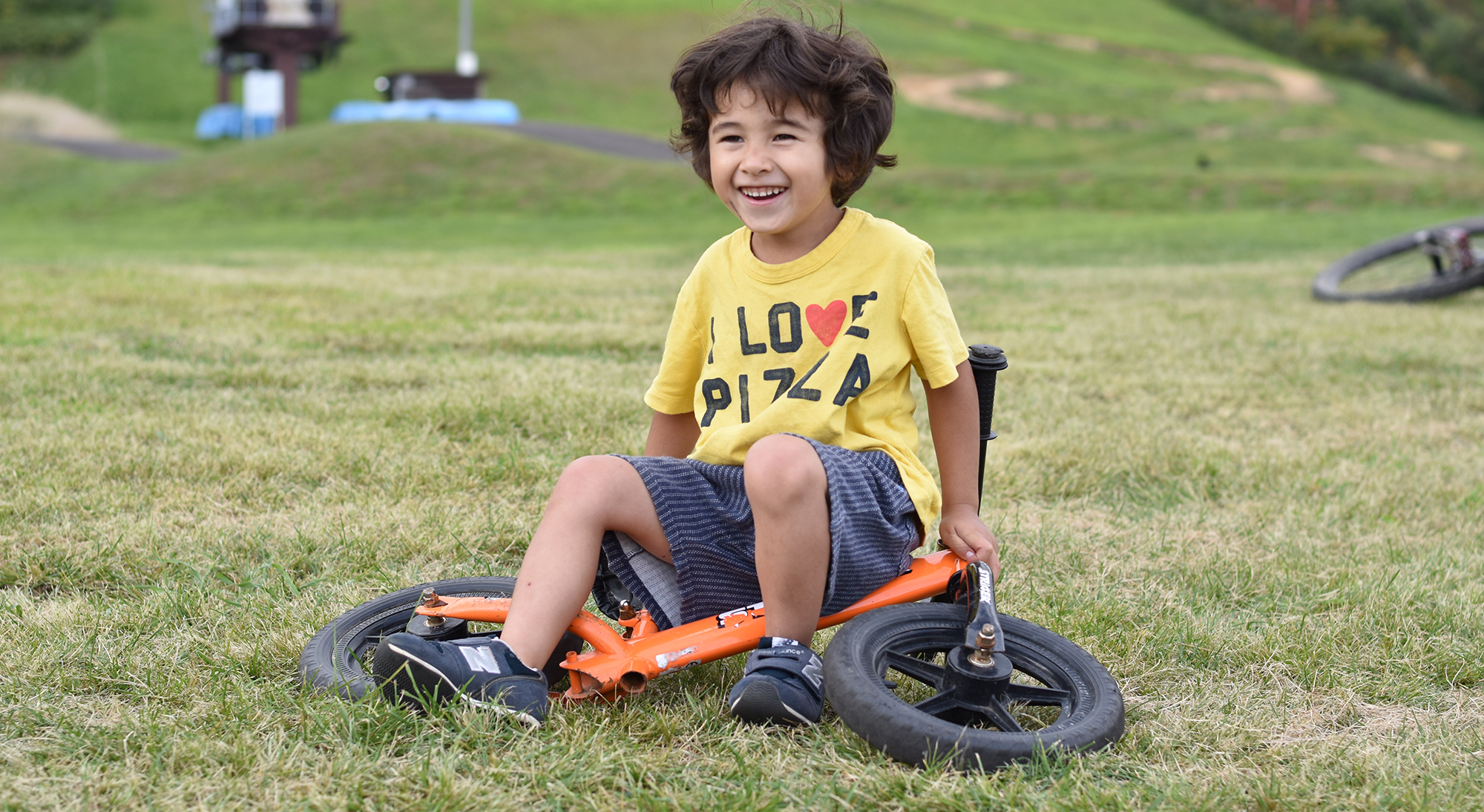 There is also talk of adding skateboarding facilities and even ziplines to add to the immediate amenity and economic objectives of the park. Not to mention the massive returns that will flow into the region when mountain bikers start to travel here specifically for mountain biking – accommodation, food, leisure, retail expenditure, etcetera. Everything the ski season has but on opposite sides of the year creating a year-round balance.

And that is the ultimate aim – to level up the difference between summer and winter to provide a much more stable, year-round economic environment for residents and workers.

Canada’s Whistler is the poster child for such a summer-winter transition, with its green season now busier than its long-famous winter. 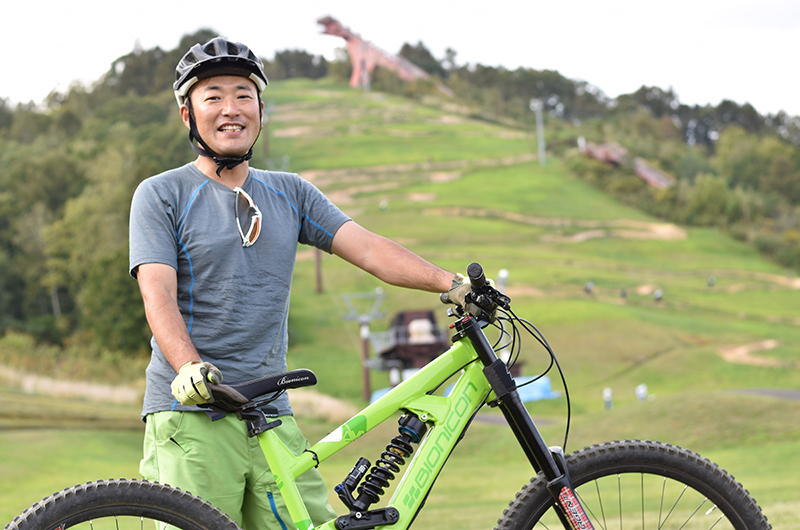 “A lot of my friends lived here for a few years but then went back home because they couldn’t get stable work throughout the year,” Nakajima-san says.

“We can’t compare ourselves to Whistler because the area is smaller, the mountains are smaller and the clientele is probably a little bit different. At the moment our business is probably 95 per cent winter, 5 per cent summer. Our first target is to make that 70-30, then our goal is 60-40. Then we can have more stable employment year round.”

Like all great achievements, it takes a long time and a lot of hard work to become an overnight success. Nakajima-san said this was his tenth year working on developing mountain biking in Niseko and he was surprised at just how successful Asahigaoka had been.

“We regularly have 50 or more people now – I thought it would take more time but they’re already here. Finally I feel the mountain biking industry is coming.”

Balsiger believes the four Niseko resorts – all owned by different companies – should each create a different product but then link them all together.

“In my opinion what Niseko should focus on in the next five to 10 years is families and complete beginners – having between four and eight super easy, very short trails up to 500m. That’s it. Then linking them all with a very easy cycling path so people can commute from trail to trail to trail, and into Kutchan Town.”

8 FACTS ABOUT THE MTB MARKET