The Festival of Japan kicks ass!

‘Rich in culture’ is a phrase that is often bandied about, but my visit to The Festival of Japan’s martial arts exhibition today really defined the term for me… then underlined it and finished it off with two exclamation marks.

I have heard of kendo before, but seeing a demonstration by kendoka, or ‘someone who practices kendo’ from the Kutchan Kendo Club served as a thumping reminder that I am in Japan, no matter how multicultural Niseko might feel at times.

The kendoka spar for a captivated audience!

The kendoka had the full traditional garb, including scary alien helmets and lacquered armour that thankfully protected them when they were going at each other with those wooden swords. Whatever that lacquered stuff is made of must be pretty effective, because guests were eventually invited to have a bash at them with the shinai, and a few kids let them have it! 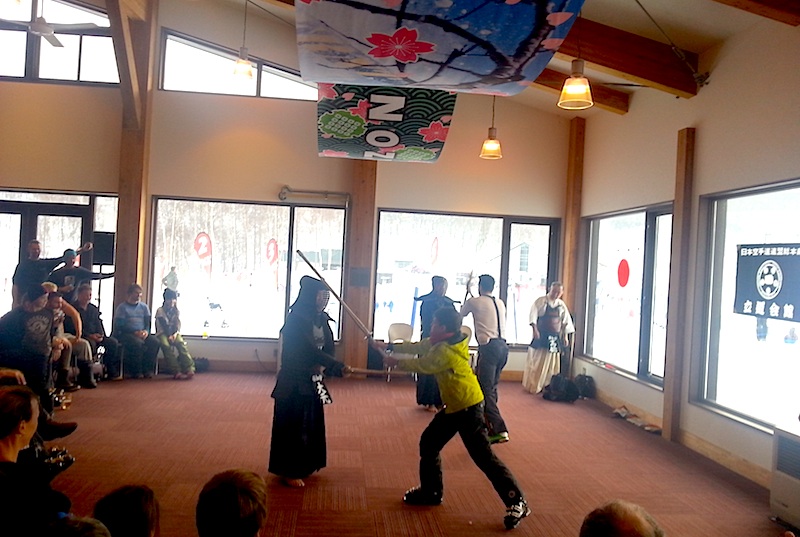 This kid got him good, even though he was wearing ski boots…

My knowledge of karate doesn’t extend much past The Karate Kid, so I reveled in nerdy delight as I learned the origins of karate from the interpreter from NPO World Karate Organisation. Apparently it stems from a time in Japan when the rulers didn’t allow the common people weapons. To protect themselves, they had to learn to fight by hand, or using rudimentary farm weapons, and thus was karate, ‘the way of the hand’ born. Wikipedia claims that it was brought to Japan from India, but this version is so much better!

Here are the karate guys, ready to wow us with their high kicks

As a childhood Ninja Turtles junkie, I was tickled pink to see them pull out the nunchaku (two sticks joined with a chain), sai (viciously large pronged forks), and bō (er, a long stick) – I guess it was asking a bit much to see them knock around with giant swords too. This also lends to the theory I mentioned earlier, because obviously these weapons are descended from farming tools, right?!

The leader of the karate pack is master Nobuo Kobayashi who had no problems chopping through concrete blocks, despite his 70 years, which seemed to have only served to make him as hard as nails. The former World Champion proved quite the showman, appealing to the crowd and eliciting plenty of laughs despite the language barrier. 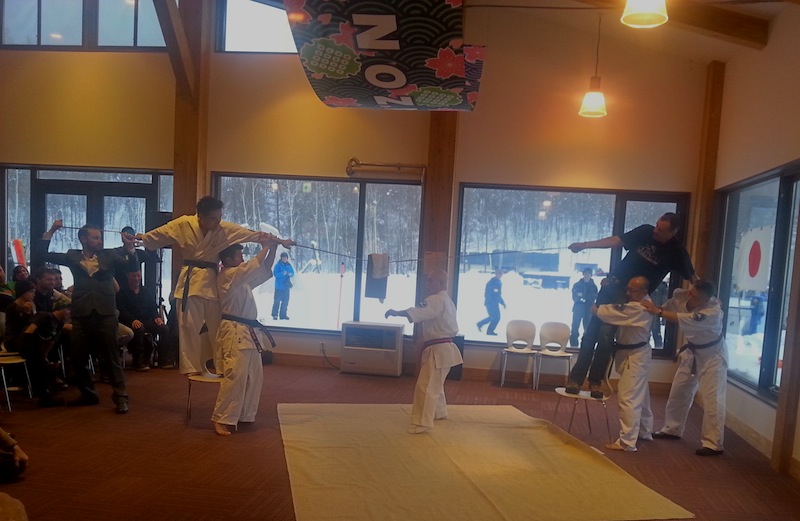 Kobayashi sama breaks a cement block hanging from a rope with one strike. He is reportedly the only person in the world that can do this!

At ten years old, the two youngest members of the group gave an impressive display of focus and control – the little guys’ high kicks put my cancan to shame. It was also sobering to see the discipline and application in their faces during their forms, and again I was reminded that Japan is a country bursting with pride and tradition, not just powder snow. 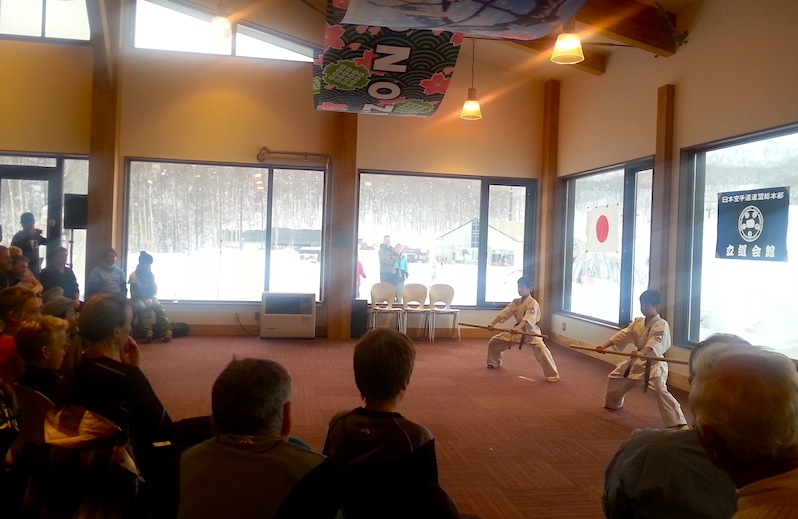 Focus and discipline from the youngest members of the karate mob

Running over ten days, The Festival of Japan is a welcome addition to our little town, where we love a reminder that we are having the time of our lives in Niseko, Japan, and not just at any old ski resort! Check out their range of culturally intriguing events at festivalofjapan.com, which include traditional musical concerts, origami making, native Ainu performances and a sumo banquet. Culture – get it into ya!