Calling all park rats! A break down of Grand Hirafu’s terrain park

The first time I came to Niseko I met a guy on the train who said he was looking forward to riding park. I smiled in a friendly manner and said ‘cool’ but inside I was giving him a withering look and thinking, ‘OMG are you serious? Go back to Perisher, dude.’

Since then, I have learned that there are others who will come to this magical land of powder with a inexplicably keen desire to ride park. Instead of scoffing at this thought Mean Girl-style, I chose this glorious sunny day to compile a study of the terrain park in Niseko Grand Hirafu. 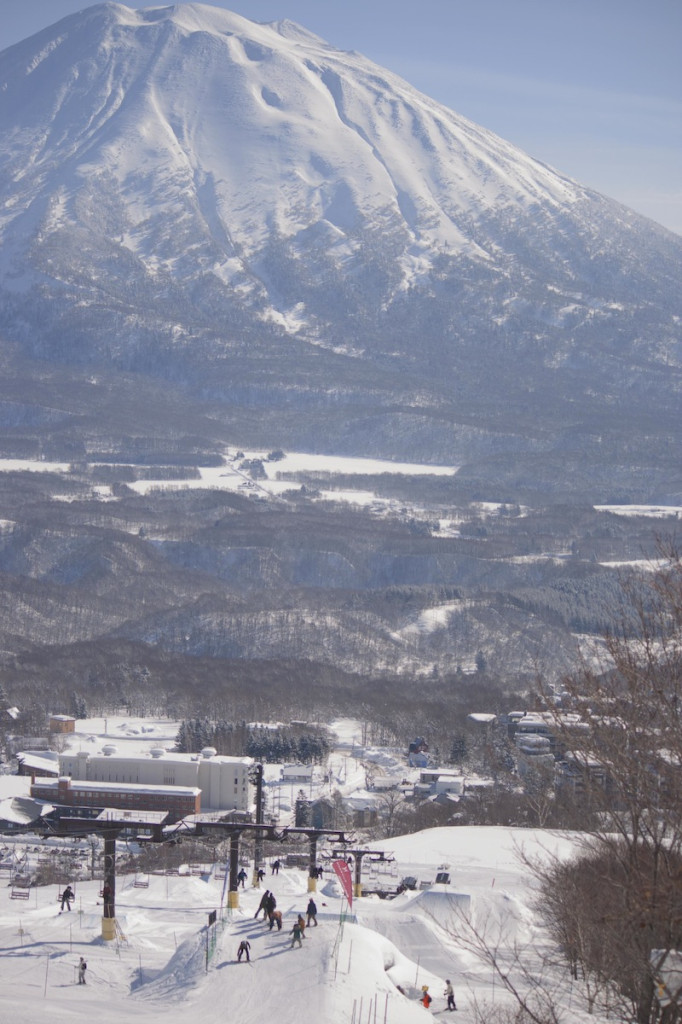 A gorgeous day in Hirafu, perfect for some park laps

I am not a park frequenter, so if any of this information is wrong please feel free to comment! There seem to be no official names for these features, so I have coined my own as I’m sure you’ll be able to tell.

By my best count, there are currently twelve features in the Grand Hirafu park; five rail/box things and seven things that I put in the category of jumps.

I find the two tabletops that greet you at the entrance of the park to be quite intimidating. I learned today that you should only speak of jump size in terms of feet, metric system be damned. Apparently these first two are around 15 and 20 feet respectively, so I like to call them the Terrifying Tabletops. 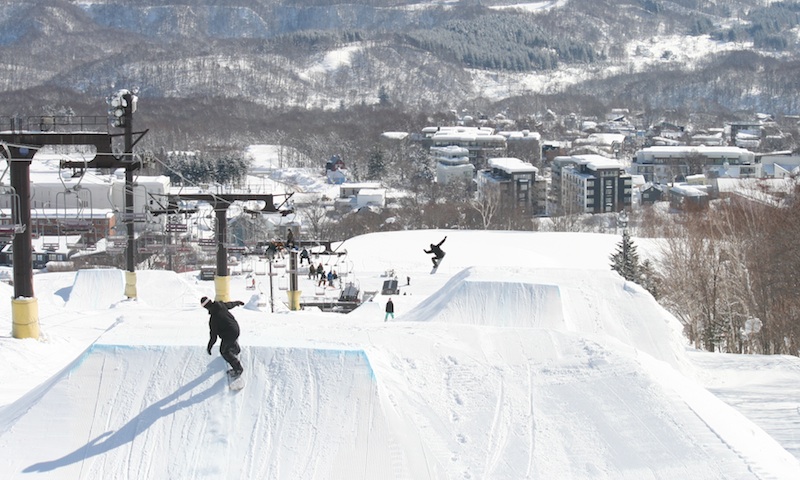 The Terrifying Tabletops in all their glory

On your far left, there is a much friendlier little tabletop, perfect for practicing tricks, and suitable for kids who are at a jumping level. This one, I have dubbed The Little Person’s Jump.

Between The Little Person’s Jump and Terrifying Tabletop #1 is a low, flat box known in parks around the world as the dance floor. This feature seems to provide a good opportunity for advanced riders to do some inventive tricks, and for learners to progress towards rails.

The dance floor! Note Terrifying Tabletop #2 looming in the background…

Further down, you get to a set of three rail features. From left to right, you have a red pipe, a flat rail that I have heard called an ironing board, and a down rail which I have never seen anyone hit. These features are known collectively in my mind as the No-Go Area. 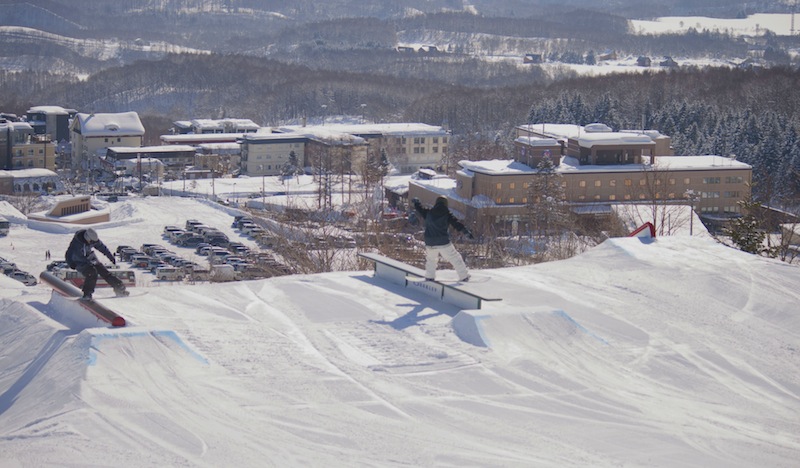 The No-Go Area, a set of three rails that look fun for other people but are best kept far from my person

To the left of the No-Go Area you’ll find an obligingly built ramp leading up to a 25-foot kicker, which I simply call Big Scary Kicker. 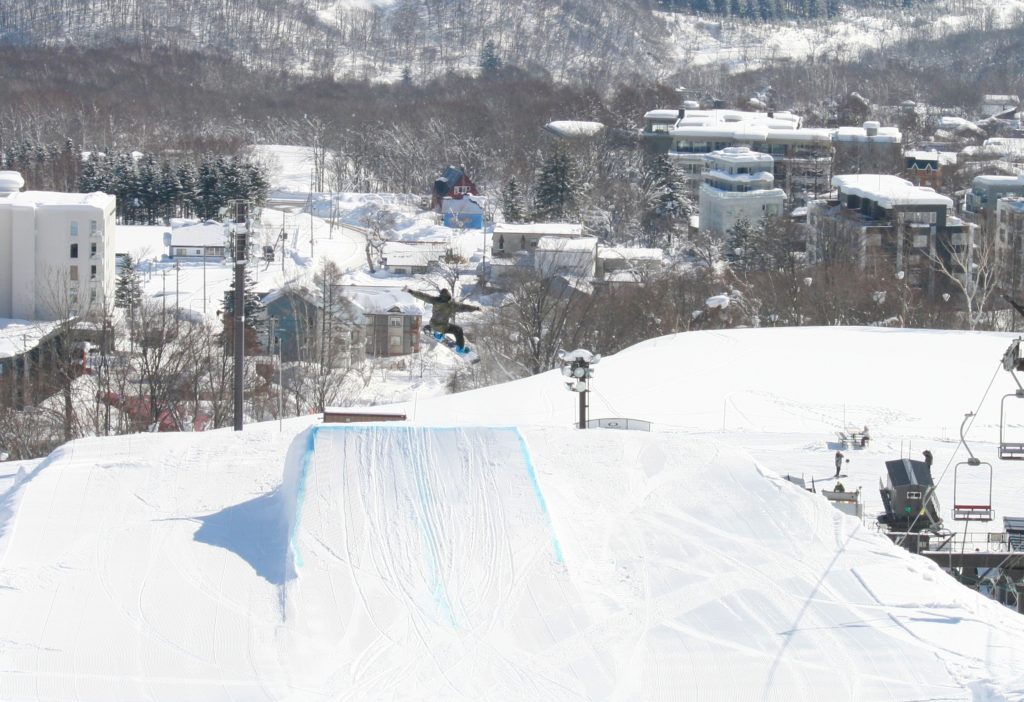 Straight below the No-Go Area is another rail thing, which we’ll call a skinny down box, which is to the right of a long run up to a 35-foot kicker that I’ve named The Hairy Yotei due to its stunning Yotei backdrop. There is also a relatively new, odd-shaped feature to the right that I’ve called Big New Hip, for want of a better term. 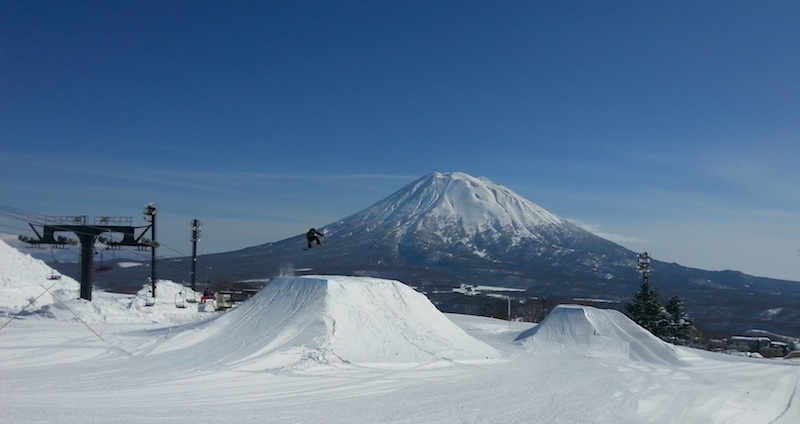 Last but not least, comes the 45-foot Giant Scary Kicker to the far left, which would probably also offer a great Yotei backdrop if I ever went close enough to investigate. 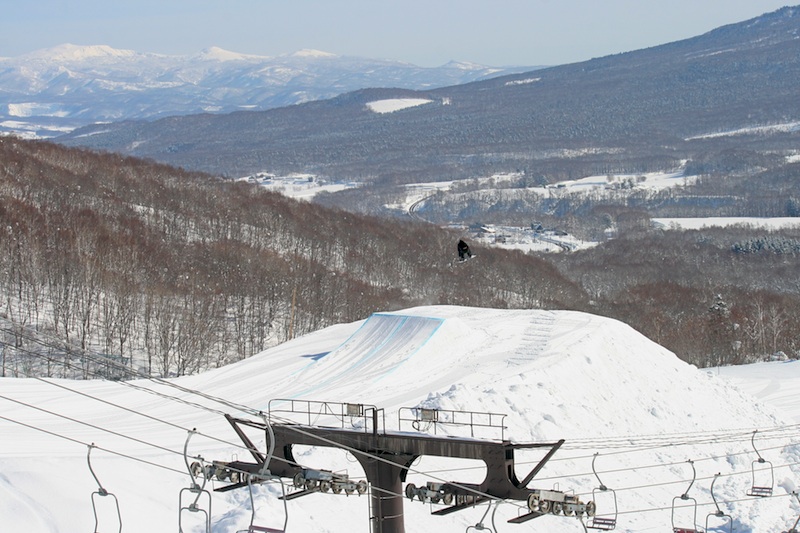 Giant Scary Kicker, shown with chairlift to give you perspective in case my measurements are wrong

For those of you planning a trip to Niseko and secretly wondering what park features you’ll get to hit, you can rest easy, because there are plenty of park rats to play with! The terrain park is located underneath the King Pair Lift #1 A&B, to skiers right of the Hirafu Gondola. Stay tuned for a post on the half-pipe in Hanazono!